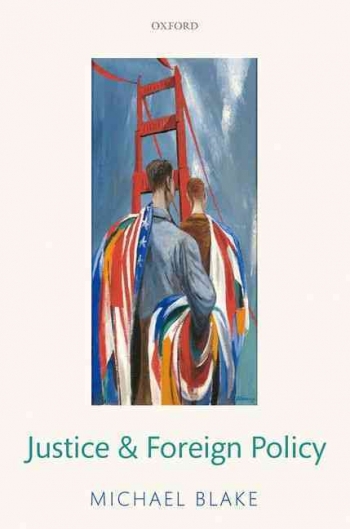 Michael Blake has a new book out... Justice & Foreign Policy.

This book is an argument about the moral foundations of foreign policy. It argues that a liberal state can insist upon the universal reach of liberal ideas, while still distinguishing between what is owed to citizens and what is owed to foreign citizens. This liberalism includes a concern for liberal toleration, which is intended to defend the proposition that a liberal state can work for democratization and liberalism abroad, without being intolerant or illiberal in doing so. What constraints there are on foreign policy emerge not from the need to tolerate undemocratic regimes, but from the prudential reason that there are few effective and proportional means by which such regimes might be liberalized. It also argues that international inequality is wrong only when and to the extent this inequality can be shown to undermine the democratic self-rule of a society. Global poverty and underdevelopment is wrong for reasons quite unlike the reasons given to condemn domestic inequality. These facts are combined to give an attractive and coherent picture of how the foreign policy of a liberal state might be morally evaluated.