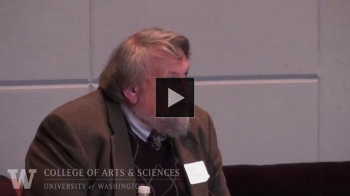 Moral Imagination: A discussion of literature and moral awareness

On April 27th, the Philosophy Club hosted Professor Emeritus Charles Johnson (UW English), who led an examination on "Moral Imagination," and the role of philosophy in literature. Charles Johnson received the 1990 National Book Award for his novel Middle Passage, was a MacArthur Fellow in 1998, and the recipient of the American Academy of Arts and Letters Award for Literature in 2002. He has also authored four novels, two collections of short stories, two collections of comic art, over twenty screenplays, 52 book reviews and has served as fiction judge for the Pulitzer Prize, National Book Award, PEN/Faulkner, and Los Angeles Times Book Prize.He is the former director of the Creative Writing Program at the University of Washington.

Professor Johnson along with UW philosophy Professors Ron Moore and Sara Goering dramatically read the short story Dr. King's Refrigerator (written by Johnson) to the guests. Then the three of them had a lively discussion on the contribution literature makes to the development of moral awareness. The evening brought together alumni, friends, faculty, and current graduate and undergraduate students.

What truth can be learned from fiction? What moral edification can be gained from novels that cannot be gained from reading ethics textbooks alone? Why does morality require imagination? Do we hold authors to a higher standard of morality? These questions and more were all part of the animated discussion by the participants and audience. The philosophical discussion continued right on into the reception portion of the program, and all present had a wonderful time. When asked how he felt about the evening's activities, Professor Johnson said, "This is the most fun I have had since I retired from teaching!"

If you were unable to join us for the evening's discussion, we did film it. You can view it via this link.