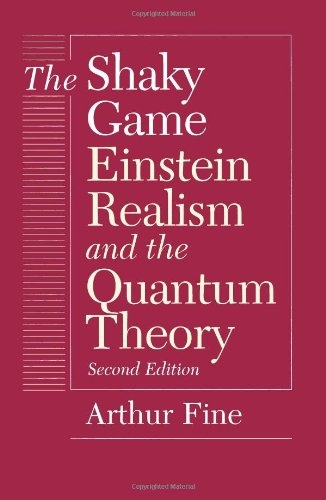 Professor Arthur Fine's contributions to the field of Philosophy of Science were celebrated at this year's meeting of the Pacific Division of the American Philosophical Association. Colleagues, students, and former students of Arthur gathered to celebrate his work with a symposium and reception, which honored the 25th anniversary of his book, The Shaky Game: Einstein Realism and the Quantum Theory. University of Washington Professor John Manchak, who specializes in Philosophy of Physics, wrote the following comments on Arthur's book:

In nearby Port Townsend, long before becoming a faculty member at UW, Arthur Fine was finishing up writing a book on Einstein and scientific realism. Roughly put, scientific realism consists in two positions: A semantic component holds that the theoretical claims of our scientific theories should be read literally. And an epistemic component holds that evidence gathered from observations can give us good reasons to believe as true the claims which our scientific theories make about the (observable and also the unobservable) world. Two influential types of empiricism run counter to realism; the logical empiricism type of anti-realism denies the semantic component while the constructive empiricism type denies the epistemic component. Philosophy of science in the latter half of the 20th century was concerned largely with the question, "Should one be a scientific realist or a (type of) anti-realist?"

The Shaky Game argues that the answer to the above question is "neither." Realists and anti-realists alike share a core position; they simply trust the results of science (e.g. concerning electrons) in the same way they trust sensory evidence concerning everyday objects (e.g. tables, chairs). What distinguishes the realist from the anti-realist is what is added to this core position. For the realist, it is a dogmatic insistence upon the semantic and epistemic components mentioned above. For the anti-realist, it is a dogmatic denial of one or the other. But (and here is the upshot of Arthur's seminal work) we need not add anything to the core position. This minimalist viewpoint, dubbed the "natural ontological attitude" is, itself, an elegant philosophical stance. And moreover, a detailed historical examination shows that Einstein himself seemed to have held this stance all along with respect to quantum theory.

With a bit of hindsight, it is now clear that Arthur's book has been enormously influential. It has been cited hundreds of times in the literature. But much more importantly, it has helped to (forgive the pun!) shake the field up a bit. Questions which were, at one time, regarded as the most important and urgent in philosophy of science (such as the one above) have now been deemed less important by the community. In the meantime, new lines of inquiry, more closely connected with scientific practice, have revealed themselves. In part, this is due to Arthur's work. Finally, let me say thatThe Shaky Game was the first philosophy of physics text (of any kind) that I read as an undergraduate. (And I think it's telling that the book was given to me by my then physics (!) professor.) Its influence on me personally simply cannot be overstated.