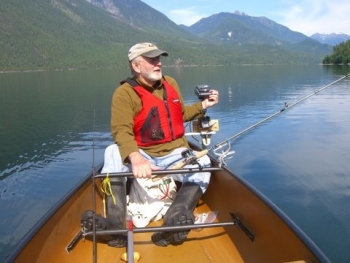 On May 23rd we celebrated Professor Ken Clatterbaugh's retirement. Ken is teaching his last class this autumn quarter. It is an honors seminar called, "Philosophy over Lunch," and it covers the long and somewhat antagonistic history of philosophy and religion. To recognize Ken, and the legacy he leaves behind, the Philosophy Advisory Board has created the Ken Clatterbaugh Endowed Scholarship fund. This fund supports scholarships for undergraduate philosophy majors. We are very close to our target goal! Please honor Ken with a gift to this new fund here and/or send your well wishes and remembrances to kgoldyn@uw.edu. These remembrances will be included in a tribute to Ken that we are planning for his last day of teaching.

Ken joined the University of Washington's Department of Philosophy in 1966 after completing his PhD at Indiana University. Ken's primary teaching focus has been in early modern philosophy, social philosophy and gender studies; although in his first years at the University he also taught ancient philosophy, philosophy of science, and logic. Throughout his time at the University, he has maintained close ties to Women Studies (now called the Gender, Women & Sexuality Studies Department) and the Honors Program. In recent years he has taught philosophy of religion. Ken is currently serving as the Joff Hanauer Honors Professor in Western Civilization. In 1996, Ken became the chair of the Department of Philosophy, a position he held for the next fifteen years. In winter quarter 2004, he also served as interim Dean of the Division of Social Sciences. Ken played a key role in the diversification of the faculty in the philosophy department, and our high percentage of women faculty members is due, in many respects, to Ken's tireless efforts.

Here are a few alumni tributes that have already come in for Ken:

When I graduated from the UW in 1987, I recall there were only about 80 undergraduate Philosophy majors out of around 30,000 students. The number of Philosophy majors has increased dramatically in the time that Professor Clatterbaugh has been Chair. While some of the other professors focused on the more esoteric aspects of the discipline, I recall that Professor Clatterbaugh made philosophy accessible, emphasizing its practical applications and helping me to see the world in a whole new way. My Philosophy education has been invaluable throughout my career, and I continue to draw on what I have learned every day. – Samantha Blake, BA '87

Ken was instrumental in bringing undergraduates into the philosophy community at the UW. He gave me a chance to be on departmental committees, to be a voice for my fellow students and was a great supporter of our newly revived Society of Undergraduate Philosophers. I have the fondest memories of my time as a philosophy student at the UW, and Ken deserves a lot of credit for that. – Allison Henrich, BA '03

Video of the speakers at Ken's retirement celebration can be found online here.