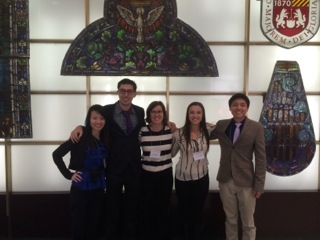 The Bioethics Bowl is modeled on the Ethics Bowl and takes place in conjunction with the National Undergraduate Bioethics Conference. Approximately 20 teams discuss and defend their views on various moral issues. The Bioethics Bowl gives students an opportunity to think about and critically engage with difficult questions in medicine and health care. Teams receive 14 cases prior to the Bowl, for which they must prepare arguments to present and defend against other teams.

The April competition was hosted by Loyola University in Chicago. The UW team started preparing in January, holding weekly meetings to discuss the cases. Questions raised included: Should nursing home residents with mild dementia be allowed to engage in romantic relationships with each other?; Is it ethical for parents to decide to surgically alter their autistic son's vocal cords to minimize severe vocal tics and screaming?; Should doctors be replaced by artificially intelligent computers like IBM's "Watson"?; And do private physicians have a right to refuse to see unvaccinated children?

The team's coach, Asia Ferrin, says about the experience: "I absolutely loved working with these students on these topics and seeing them present philosophical arguments at the tournament. The cases were challenging and kept us talking about these issues before, during, and even after the competition. Connie, Jack, Binhan, and Haley showed grace, kindness, patience, teamwork, and thoughtfulness in their presentations, which made me incredibly proud. I couldn't have asked for a better group, and I am delighted that they want to continue and compete again in 2015. My fellow graduate students, Michelle Pham and Dustin Schmidt, are interested in coaching the team next year, which I think will be wonderful."

The aim of the bowl is not only to give students an opportunity to think about challenging situations, but also to help students develop the skills needed for working together as a team, engaging in difficult dialogue, and publicly presenting and defending one's ideas. Connie Chien writes about these elements of the Bowl: "For me, the Bioethics Bowl was an invaluable learning experience. I was never fond of public speaking and performances, so participating in this Bowl was a significant step out of my comfort zone." When Connie's nerves crept up in her first round, the whole team worked together to make her feel more comfortable able and give the presentation: "I was relieved and thankful when my teammates jumped in and took up some time while I collected my thoughts. That moment will forever be one of the most profound experiences of teamwork for me. I took comfort in knowing that I had teammates who were there to support me. I truly felt like we were a team and not just individuals who focused on different cases. I am so grateful I was presented with this opportunity to challenge and push myself in ways I had never done before."

Jack McClelland reflects on the intellectual challenge of the Bowl: "I found the Bioethics Bowl to be the perfect kind of challenge. It allowed me to research new and interesting topics, develop and assess my own arguments, and ultimately present them in a clear and persuasive way. Not only that but it also required my teammates and me to be quick on our toes when it came to answering the questions of our competitors and judges. I thoroughly enjoyed being able to apply my knowledge in philosophy to some real world science, medical, and social issues. The Bowl itself was an unforgettable experience. Everyone was very friendly, intelligent, and ultimately engaged in the cases that we all prepared. While we were competing against each other, the debates felt more like a genuine search for the answer to these difficult ethical questions than a quest for personal victory."

Binhan Pham and Haley Amemiya echo Jack's enthusiasm. Binhan says: "The Bioethics Bowl was a blast! There were many more participating universities this year, which made debates and conversations enjoyable. While most teams reached similar conclusions on the cases, it was interesting to talk about the different approaches they took to the cases." And Haley agrees: "I thought that the Bioethics Bowl was an invaluable experience. It was intimidating to debate with teams from schools who have competed before, but our team was excellent. I loved meeting different students and exploring Chicago, and hope that we are able to keep participating in the Bowl for years to come!"

The team and coach thank Michael Rosenthal, who supported the team's trip; Bev Wessel, who helped with the team's travel arrangements; all faculty and graduate students who attended sessions and gave feedback to the team; and especially to Michael Podlin, whose generous endowment made the team's trip possible.