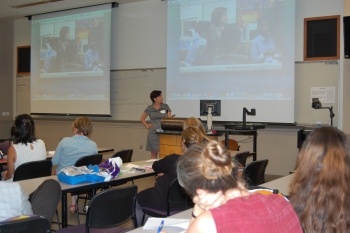 The Center for Philosophy for Children hosted the PLATO 2015 Conference on Equity and Inquiry at the end of June. PLATO (Philosophy Learning and Teaching Organization) is a national organization advocating for the introduction of philosophy into pre-college classrooms and for increasing access to philosophy beyond the academy. Formed in response to the growth of pre-college philosophy in the U.S. over the past decade, PLATO’s mission involves connecting the education and philosophy communities through programs, resource-sharing and the development of a national network.

Conference participants included speakers and attendees from across the United States as well as Europe, South America, the United Kingdom, Australia, Canada, and Asia. Award winning author and educator Jonathan Kozol delivered the keynote address, “The Big Questions Are Already There in the Hearts of Children.” Kozol received the National Book Award in Science, Philosophy, and Religion for Death at an Early Age; the Robert F. Kennedy Book Award for Rachel and Her Children; and countless other honors for Savage Inequalities, Amazing Grace, and his most recent writings about poverty and justice.

The conference included hands-on workshops about introducing philosophical inquiry in elementary, middle and high school classrooms, as well as presentations on topics such as creating classroom communities, building school philosophy programs, developing a culturally responsive pedagogy for philosophy programs, and much more.

The next PLATO conference will be at the University of Chicago in 2017.  Please see the PLATO and Center for Philosophy for Children websites for more information.

A special thank you to the Department of Philosophy, the College of Education, and the Squire Family Foundation for sponsoring the conference at the University of Washington.