Center for Philosophy for Children 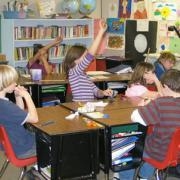 The Center experienced another year of expansion in 2014-2015. A growing cadre of faculty, graduate students, undergraduates, teachers, and volunteers made possible the involvement of the Center’s Philosophers in the Schools program in 50 public elementary, middle and high school classrooms around Seattle this past year, including several middle schools new for the Center and weekly classes at the public school at Seattle Children’s Hospital. This summer several people working with the Center are leading philosophy sessions at summer camps for young people.

The Center has begun planning for the 2016 Washington State High School Ethics Bowl, which will be held on January 30, 2016. An Ethics Bowl is a collaborative yet competitive event, in which teams analyze a series of wide-ranging ethical dilemmas, deepening the awareness of high school students about interesting ethical, legal and philosophical issues. We are fortunate to have again this coming year a University of Washington intern helping to organize the event. Kelsey Walker is a senior philosophy and psychology student who will be working with local high schools to support their participation in the competition.

We were thrilled at the success of the 2015 PLATO (Philosophy Learning and Teaching Organization) Conference, hosted by the Center in June. With over 125 attendees, two days of inspiring talks, new and renewed connections among pre-college philosophy practitioners from around the world, and a moving keynote address by noted educator Jonathan Kozol, attendees left the conference feeling energized about the prospects for introducing more young people to philosophy and with new tools and ideas for doing so.

The Center's work is made possible by the donations of private donors, which have helped fund the growth of our Philosophers in the Schools program, our Philosophy for Children graduate fellowships, and our workshops for teachers.

We hope you will consider supporting our work. We really appreciate your gifts - thank you very much!