A Philosopher and an Atmospheric Scientist Walk Into a Bar... 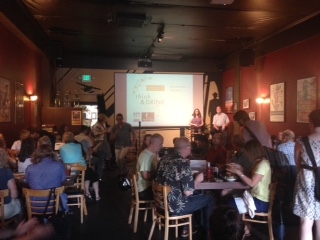 Philosophy Professor Lauren Hartzell Nichols and Atmospheric Sciences Professor Thomas Ackerman were brought together by Humanities Washington for the Think and Drink events at Naked City Brewery and the Rainier Room in Seattle to discuss and ponder the reality of climate change and whether or not technology should be part of the solution.

They spoke of the impact rising temperatures will likely have on Washington State, including more frequent hot, dry summers like the one we’re experiencing in 2015. Global threats, such as sea level rise, will also impact Washington State.

Both discussed the use of geoengineering, which involves either removing CO2 from the atmosphere or reflecting solar energy from the sun back into space before it enters our atmosphere. Although currently we do not know how to do either of these things on a mass scale, scientists are researching how to make this possible. Meanwhile philosophers like Hartzell Nichols (and Stephen Gardiner) are questioning the ethics of geoengineering. They are asking questions such as: What are the ethical implications of geoengineering research? Testing? Deployment? Are there moral differences between different geoengineering technologies? And, what would a morally appropriate governance scheme for geoengineering look like?

While Lauren and Tom agree there are significant moral questions that need to be addressed, and both stress that at most geoengineering strategies should be used as a temporary band-aid while mitigation efforts are implemented, Tom is much more supportive of an aggressive research program than Lauren is. So while KUOW framed this event as a debate, it turned out to be much more collaborative, demonstrating how philosophers and scientists can work together.

The podcast of Lauren and Tom’s talk is available here.