Register for the Philip Kitcher Lecture, Progress in the Sciences and in the Arts 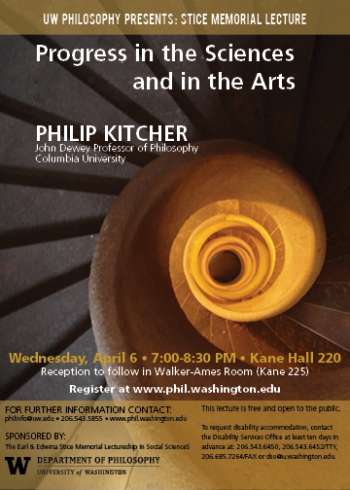 Join us on Wednesday, April 6th from 7:00 to 8:30 PM in Kane Hall 220 for Progress in the Sciences and in the Arts presented by Philip Kitcher, John Dewey Professor of Philosophy at Columbia University, a reception will follow in the Walker-Ames Room (Kane 225). To register, go to the Events Calendar and click the “Register” button below the April 6, 2016 event listing.

Progress in the Sciences and in the Arts

Philip Kitcher, John Dewey Professor of Philosophy at Columbia University, is interested in the ethical and political constraints on scientific research, the evolution of altruism and morality, and the seeming conflict between science and religion. Kitcher’s recent books include Life after Faith: The Case for Secular Humanism, Preludes to Pragmatism, and The Ethical Project. Kitcher has been an American Academy of Arts and Sciences Fellow, and was awarded the APA Prometheus Prize for lifetime achievement in “expanding the frontiers of science and philosophy.”

This lecture is free and open to the public