Climate Change: Life and Death – A Lecture by John Broome 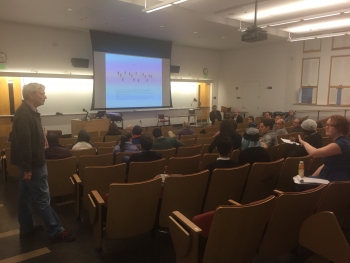 Should we consider the population among our moral concerns in climate ethics and policy? John Broome, during his Ben Rabinowitz lecture in Environmental Ethics "Climate Change: Life and Death", urged yes. Broome argued that both deaths and births should be considered when shaping the ethical foundations of climate policy, and that value theory could help guide us in determining their place in climate ethics and policy.

Professor Stephen Gardiner, who organized Professor Broome's visit, gave a warm and thoughtful introduction. Dr. Gardiner's introduction highlighted Dr. Broome's involvement in a recent assessment report by the Intergovernmental Panel on Climate Change (IPCC), his early work on reasons and moral philosophy, and his more recent work that investigates the ethics of climate change. John Broome is currently a Visiting Professor at Stanford University, and is the Emeritus White's Professor of Moral Philosophy at Oxford University.

Most agree that human deaths due to climate change are central moral considerations, but Broome’s inclusion of births is more controversial. Ultimately, Broome’s treatment of death and birth in relation to climate change boils down to his controversial ethical position, which treats deaths and lives as quantifiable units that contribute to the overall "goodness" or "badness" of states of affairs. We can, he argues, determine the value of possible outcomes based on these considerations of "goodness" and "badness" and shape our behavior and policy accordingly. Despite what Broome sees as a strong intuition that births into a population are morally neutral to the state of affairs, he reasoned that this intuition of neutrality was philosophically untenable, and that we thus ignore additions to populations at our peril.

Broome faced a rigorous line of questioning from students, faculty, and other attendees. Among topics of conversation were: