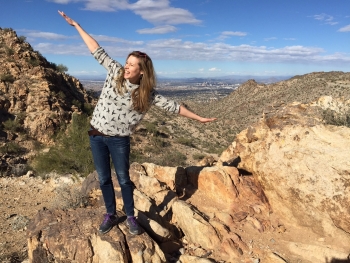 Carina Fourie joined the Department of Philosophy in the fall of 2015 as the Benjamin Rabinowitz Assistant Professor in Medical Ethics.  While Carina has a range of interests in biomedical ethics and social & political philosophy, she is particularly focused on research and teaching at the intersection of social justice and medical ethics. This takes a variety of forms –for example in social-relational equality and its application to health, sufficientarianism, gender and racial inequalities, the social determinants of health, and health care policy and reform. We conducted the following interview with Professor Fourie to learn more about her background and professional interests.

What sparked your interest in philosophy?

When I first started studying at the University of Johannesburg, I was planning on becoming a psychologist. I only enrolled in philosophy courses to earn credit as part of my degree (and my sister had told me that she found philosophy interesting). Although I enjoyed studying psychology, particularly because it provided me with an arsenal of information for informally diagnosing all my friends and family members with personality disorders, I grew to appreciate philosophy more, and after graduating with a degree in both subjects, I decided to continue my studies in philosophy as a graduate student. One central reason that philosophy became more significant for me is that it spoke to and helped to shape constructively my political anger – I had grown up in Apartheid South Africa and was deeply uncomfortable with the society in which I lived. I was motivated to understand what a genuinely just and equal society would look like, and what my moral obligations were to help to establish such a society. Philosophy helped me to develop these ideas.

I remain most interested in social justice but now with a more specific focus. After having worked in occupational health research and policy for a number of years, and developing an awareness of how deeply social environments impact health, my research is primarily concerned with justice and equality as they relate to health and to health care settings. That means that I’m concerned with posing and exploring answers to questions like: “What kind of health care insurance system is fair?” “Are health disparities that stem from socioeconomic status unjust?” and “How do the working environments of hospitals impact patient health?” As mental illness is such an important part of ill-health and one that has often been neglected, my research also often leads me back to the initial interest I had in psychology as an undergraduate.

What areas of philosophy do you teach?

I find that student-led discussions work remarkably well, especially in small and advanced classes. I often have students from a range of disciplines—for example, I have philosophers, majors in public health and bioengineers in my Public Health Ethics course—and they learn largely from each other, as opposed to learning from only one person, even if that person is their teacher. I set the shape for discussions and facilitate them, but my students’ expertise, intellectual curiosity and critical questions drive the conversation. The less I talk, often, the better!

Where were you working/teaching before UW?

I worked at the Ethics Centre of the University of Zurich in Switzerland. Our office was a lovely old converted villa next to the botanical gardens, with a ping pong table in the basement. I am happy to be working at UW but I miss taking breaks from work to play table tennis. Over here, I think we should convert the big table outside the administrative office into a ping pong table.

What is your favorite thing about UW so far?

It’s such a beautiful campus, particularly around the Quad. I find that extremely motivating.