What Knowers Know Well: Why Feminism Matters to Archaeology 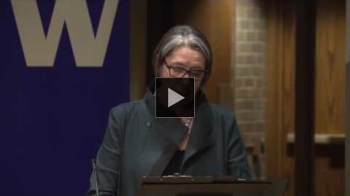 What Knowers Know Well: Why Feminism Matters to Archaeology

Professor Alison Wylie’s Katz Distinguished Lecture in the Humanities “What Knowers Know Well: Why Feminism Matters to Archaeology” served as the opening keynote for the conference Feminism and Classics 7: Visions.

Professor Wylie’s lecture looked at neglected questions about women, gender, and sexuality that have been on the archaeological agenda since the late 1980s, and gender-inclusive archaeology which has transformed what we know about the past. But some of its strongest advocates deny that they are engaged in feminist scholarship or influenced by feminist politics. Alison Wylie questioned their conviction that research is only credible if it is “value free” and argues that the critical insights of feminism are a crucial resource for empirical research in any field. Rather than a “view from nowhere,” Wylie makes the case for rethinking ideals of objectivity in terms that counter epistemic injustice and mobilize the situated interests and experience of diverse knowers.

Wylie’s abiding interest as a philosopher of science is in how we know what we think we know, especially in archaeology and feminist social science.  She asks: What counts as evidence? and, How are research communities enriched when they cultivate a diversity of experience, angles of vision, skills and insight?

The Katz Distinguished Lectures in the Humanities Series recognizes scholars in the humanities and emphasizes the role of the humanities in liberal education. All are free and open to the public. Information on past and future Katz Lectures can be found here.