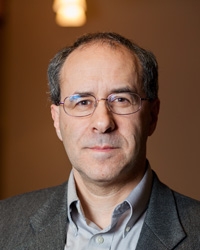 Michael Rosenthal's interview with Hannah Pressman of Jewish Studies at the University of Washington:

The Stroum Center is delighted to announce that Michael Rosenthal has been selected as the next Samuel and Althea Stroum Chair in Jewish Studies. This is an honorary three-year position that recognizes Professor Rosenthal’s contributions to the program and provides him with additional research funding thanks to the Samuel and Althea Stroum Endowment. (Editor’s note: This position is distinct from the Directorship of the Stroum Center, which will continue to be held by Professor Noam Pianko for the 2016-17 academic year.)

We recently caught up with Professor Rosenthal, who is wrapping up a successful chairmanship of the UW Department of Philosophy, and heard about his plans for this new role in the Stroum Center for Jewish Studies.

Hannah Pressman: Congratulations on being named the Stroum Chair! How long have you been involved with UW Jewish Studies, and in what capacities?

Michael Rosenthal: I have been a member of the Stroum Jewish Studies Program since I started working at the UW in 2003. I have taught courses, organized reading groups, panels, and a conference, and served on many committees, including the Stroum Lecture Committee. The most important thing is that I want my work to intersect with and contribute to Jewish Studies. I have learned a lot from my colleagues here and enjoy participating in scholarly endeavors and broader community programs that have been sponsored by the Center.

MR: There are really two answers to this question, one that is primarily scholarly, the other personal. Spinoza is really a perfect figure for me to study. He was a pivotal thinker, whom one scholar described as “the last of the medievals and the first of the moderns.” He was writing in the midst of the scientific revolution of the seventeenth century and an early figure of the Enlightenment. He challenged traditional Orthodoxy and became the basis for modern movements like Reform and Reconstructionist Judaism. Spinoza’s philosophy is deep and influential, not only in Jewish thought but in modern philosophy more generally. I never lose interest in learning more about his ideas and their reception.

The meaning of a Jewish life is not self-evident or fixed. Maimonides wrote an important book at the end of the twelfth century, The Guide of the Perplexed. It was written for Jews who were confronted with questions about their beliefs that came from their encounter with the science of their time, rooted in the philosophy of Aristotle. We need an updated version of this book. In fact, I think that we are always in the process of updating it.

If you think seriously about modern Jewish life, you will be confronted with any number of important questions: Does science challenge or even undermine religious belief? If one believes in a providential and good God—a God who cares about and guides action in the world—then how are such great evils, like anti-Semitism and the Holocaust possible? I also think that historical questions are important: what is the origin and nature of modern anti-Semitism? What is the role of Zionism and its relation to the Diaspora? Of course answers to these questions vary. Modern Jewish thinkers—from Spinoza to Hannah Arendt, along with historians, sociologists, and novelists, of course—help us make sense of our existential situation.

I started thinking about these issues when I began studying for my Bar Mitzvah, believe it or not. My Hebrew tutor challenged me to do more than the rote study required and to see the Torah as part of a larger discussion of the meaning of life. To the dismay of my father, who wanted me to become a doctor—I mean a real doctor!—I really got carried away by all these books and ideas. I interrupted my studies of philosophy at the university to spend time in Israel studying Hebrew and learning about the challenges of modern Zionism in all its variety. I worked on a kibbutz ulpan program for six months and then in a community project (Sherut L’Am) in a high school in Safed. Later I was awarded a fellowship to return for a year of study at the Hebrew University. It was during a course on Spinoza and Moses Mendelssohn, taught by Eliezer Schweid, that I realized I could combine my interests in history, philosophy, and Jewish thought in the figure of Spinoza.

HP: What classes will you be teaching next year?

I am teaching a graduate-level seminar on Spinoza’s Ethics (PHIL 522) in the autumn quarter. I am also teaching a large Introduction to Philosophy lecture course (PHIL 100). In winter I will teach History of Modern Philosophy (PHIL 322), which is a survey of some of the great philosophers of the 17th and 18th century, like Descartes, Spinoza, Leibniz, Hume, and Kant. In the spring I am going to teach Jewish Philosophy (PHIL 418), which this year will focus on modern thinkers—like Mendelssohn, Heine, Buber, Rosenzeig, Benjamin, and Levinas—who are trying to figure out the nature of Jewish belief and life after the Enlightenment.

HP: You are planning a Spring 2017 symposium on Spinoza, which will be connected to the Stroum Lectures. What is the focus of the conference, and why did you pick that topic?

MR: The focus of the symposium will be on “Spinoza and Modern Jewish Philosophy,” and the goal is to bring leading scholars to campus to talk about the important role that Spinoza’s ideas have played in modern Jewish life. It will coincide with next year’s Stroum Lectures, which will be delivered by Prof. Jonathan Israel (Institute for Advanced Study, Princeton), a world-renowned historian and expert on the “Radical Enlightenment.” His lectures will discuss the gradual emergence of ‘Spinoza’ as an icon of Jewish (and other) forms of secularism. My goal is not only to have a stimulating discussion on campus about these ideas, but also to produce a volume of essays and build a website to allow the conference to have a broader and longer impact.

HP: Do you have any new Center-wide programming initiatives in mind for the next academic year?

MR: One idea that I am considering will be to sponsor a series of workshops, each focused on a particular literary or philosophical text that has had an impact on Jewish life. I want to invite an external scholar and then bring together faculty and students here at the UW for a day of discussion.

I am so honored to have been awarded the Stroum Chair for this three-year period and I intend to make very good use of it, both for my scholarly activities and for the Jewish Studies Center!