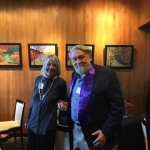 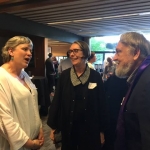 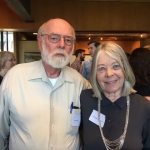 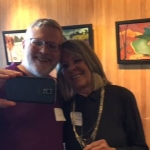 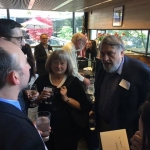 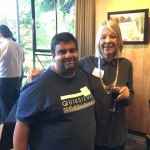 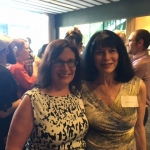 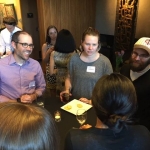 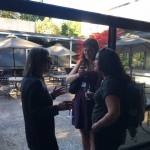 Thank you to all who joined us and sent well wishes in celebration of the retirement of our two faculty members Ron Moore and Lynn Hankinson Nelson. We had a wonderful evening filled with charming stories of Lynn and Ron from students, alumni and faculty. It is not too late to email your well wishes to both Ron and Lynn, and to make a gift in their honor to the Department of Philosophy, to help continue the great legacy they helped create at the UW Department of Philosophy.

When a faculty member retires, it is tradition within the Department that Professor Bill Talbott honors them with a poem. We would like to share Bill's poems for Ron and Lynn:

This is a paean to Ron Moore,
But also to a time that came before
The one that we inhabit now.
Times have changed, shortly I’ll explain how.

Ron came to philosophy at a time when definition was in doubt,
Of law, of art, whatever you might think about,
Without perhaps realizing it, he found his course at a young age,
To use the richness of phenomena to undermine the generalizations of the sage.

His focus was on the normative generalizations of law and of aesthetics,
Including the relation of those norms to norms of ethics.
And so in his first book he found exceptions to Kelsen’s definition of law,
But that was nothing compared to the problems for aesthetics that he foresaw.

In Puzzles about Art, Ron and his co-authors revealed the puzzles in store
For just about every generalization in aesthetics ever argued for.
It was in that book that I first learned, during a reading session nocturinal,
Of the aesthetic qualities of DuChamp’s Fountain—you know, the urinal.

And then in Natural Beauty, Ron hazarded some generalizations,
Not exceptionless ones, mind you, but enough to articulate important realizations
About the relation between art and nature, how different and how similar,
Never straying into bare abstractions, but always firmly grounded in the familiar.

I have told you something about what makes Ron Ron
But I still haven’t touched on his connection to times bygone.
Don’t worry I’ll get to that and to the impact of it.
I’ve only described one side of Ron; he is so much more multi-faceted.

One side of Ron that links to the past is his service as University Marshall at Commencement.
If you saw him in his regalia, you would have thought you were looking at Henry the Eighth revenant.
Indeed, whenever Ron led the procession with his mace and opened the invocation,
Henry in his grave wished the he could have inspired half the awe and fascination.

And never did a Roman Senator speak with more persuasion and authority
Than when Ron lifted his voice to the defense of the philosophy library.
Before the Faculty Senate, as he argued, he gestured with his right arm airily,
And the Senate voted to save the philosophy library—sadly, only temporarily.

If you only knew Ron for the impressive figure he cuts or for his stentorian eloquence,
You might not realize that there is another side to Ron, his sense of humor is part of his essence.
And for all of his commanding presence, his humor is rather Puckish.
He likes to target all those who might be tempted to think too highly of themselves, as high muck-a-muckish.
And so it was with obvious glee that in front of a large assembly
Ron suggested to President Gerberding that his World Piano Series was an indication of pianist envy.

I should also at least briefly mention Ron’s forays into psychoanalysis.
If you doubt me, just ask him to explain what the intermediary between fier and sex is.
And just when you’re starting to think that there must not be any more for me to say,
I must add that he was the first in the department ever to win the UW Distinguished Teaching Award (the DTA).

But there is one more side to Ron that I must reveal before I finish paying my respects,
Another side that links his readers and his students to the world before there were smartphones and message texts.
You see Ron is the kind of prose writer who treats the written word as a genre of art,
For whom writing is a craft in which in addition to content, form and beauty play an important part.

For generations of students Ron has written comments on papers, sentence by sentence, and in red to get their attention,
To help them to be able to think better thoughts, to improve their comprehension,
To enable them to express those thoughts with precision and with clarity,
But also with style and wit, those graces that now are such a rarity.

And so as he closes this chapter of his life, retired but not yet an old coot he
Leaves us with memories of a philosophical life of unnatural beauty.

We should all have a philosophical hero, someone to reread many times.
Lynn has at least one and he’s a surprising one, Willard Van Orman Quine.
I know what you may be thinking, or at least I can guess:
How could Quine be a hero for Lynn?  He was surely no feminist!

But heroes need not be perfect, heroes are almost always flawed.
This is because a hero is a human being, not a god.
For Lynn, Quine was a figure like Moses, an impressive but flawed man,
Who led the Israelites to salvation, but did not himself enter the Promised Land.

Quine’s thesis of the underdetermination of theories has played an important role in feminist epistemology of science,
But for Lynn it was Quine’s deeper doctrine of holism on which she put most reliance.
Holism exploded the idea that science could confirm or test a proposition in isolation
And drew attention to the fact that even unarticulated biases or presuppositions could play a role in scientific confirmation.

Quine himself had a heroic, individualist view of science and the scientist.
When Lynn asked “Who knows?” she wanted to draw our attention to the social aspect of science that Quine missed.
Knowers are better thought of not as individuals, but communities,
Which helps to eliminate individual biases, though from community biases there are no immunities.

Quine also claimed that science stood “aloof” from values and norms,
But Lynn heard in that assertion an echo of the aloofness that informs
The attitudes of scientists who think that science is not for women, just for men,
An attitude that women scientists confront over and over again.

Did you know that in the 1950’s there was a UW faculty member who would not even allow women to enroll in his class in molecular biology?
Like Aristotle, he probably thought he had enough understanding of female psychology,
To decide what women should study and what they should not.
His policy caused no campus uproar; no administrator gave it a second thought.

Even today, many scientists won’t give women a fair shot,
They say women are less collegial, when what they mean is that they don’t think of women as colleagues but as more or less hot.
In science everyone is on the look for the next “star”, who almost by definition must be male.
If a woman were half as arrogant as some of these guys, she would be set up to fail.

These conscious and unconscious biases against women continue to be a barrier to diversity in the scientific community,
As recent headlines have confirmed, science has long been a place where male sexists have operated with impunity.
Lynn argued that such attitudes would impoverish all communities scientific,
But she realized that the effects would be most profound in one community specific.

And so she decided to focus her attention on the science that focused on the nature of woman and of man,
The science that had the greatest potential to subconsciously turn social stereotypes into part of Nature’s plan;
To focus, that is, on biology, where her fears were realized prophetically
In the 1980’s when sociobiology arrived to argue that gender roles were determined genetically!

In the 1980’s Lynn fought the battle against sociobiology,
Only to see it morph in the 1990’s into evolutionary psychology.
When Lynn saw that these new theorists of the status quo even could normalize rape as “adaptive”,
She took on the task of opposing them, also; to break free of the assumptions about men’s and women’s nature by which they were held captive.

It was Quine himself who insisted that philosophy is continuous with science,
Whether true when applied to doctrine, there is no doubt that it applied to practice.
Like science, philosophy has had a practice of keeping women out.
That is something Lynn and her philosophical sisters can tell you about.

They have been the heroes who have worked to transform philosophy’s practice and its theory,
And so it is understandable if, after all these years of battling sexism in science and philosophy, Lynn is a little weary.
But she can look back with pride on the battles fought, some lost, some won,
To make science and philosophy more welcoming to everyone.

And also on a successful career as a mentor and a teacher,
Whose teaching enabled her successfully to reach her
Students, students so enthralled by what, in her courses, she proffered
That they would sign up for whatever courses that she offered.

So, relax, Lynn, you’ve earned it; take time in the morning to smell the coffee’s aroma,
And take time to celebrate—most of all, no more commuting between Seattle and Tacoma!