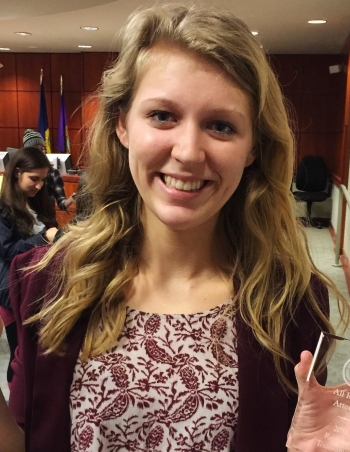 Congratulations to senior Philosophy (and Psychology) double Major  Kaitlyn McGlothlen, whose essay "Oops, There Goes My Childhood: Identity and Ethical Issues in the Selective Erasing of Memories" was recently named the winner of not one, but two separate bioethics essay contests!  With her essay, she won the "Clinical Ethics" essay contest competition hosted by Voice in Bioethics, an online journal in affiation with Columbia University and was one of two winners of the International Neuroethics Society's Student/Postdoc Essay Contest for 2016.
We asked McGlothlen to give us a synopsis of her fascinatingly-titled winning essay. Here is how she describes it:

"My paper dives into ethical issues of identity from a neural engineering lens. In my paper I use an article concerning how activating a neural pathway can actively erase memories to prompt a discussion on identity. I argue that no current definition of identity is independently sufficient for discussing ethical issues because they have too many flaws, and more importantly they fail to see this active erasing of memories as an issue to begin with. After detailing the individual theories, I go on to propose my own hybrid theory that combines three big concepts: the narrative theory of identity, the psychological continuity theory of identity, and memory. The goal of the combined theory is to overcome objections that the individual definitions face, and more importantly show why the active erasing of memories is problematic. My new cohesive theory of identity involving psychological processes, societal influences, and memory, is crucial to understanding ethical issues in neural engineering and in the active erasing of memories."

McGlothlen originally wrote the essay in Spring 2016 as her final essay for Professor Laura Specker Sullivan's course PHIL 401 - Advanced Topics: Ethical Considerations in Neural Engineering. On her experience in the class, she writes:

"[Specker Sullivan's] class was perfect because it combined my two loves of philosophy and psychology into a field I’d never heard of before: neural engineering and BCIs. For [Specker Sullivan]’s ethics of neural engineering class we discussed everything from autonomy and authenticity, to enhancement and justice, to my personal favorite, identity. Her class shed light on issues I didn’t even know were issues. It’s especially exciting because the field of neural engineering is so new that the people studying it and the ethical issues behind it ([she] and the rest of the community) are truly at the front of the movement. For our final paper we got to choose anything to write on, a seemingly daunting task, but I chose to write on issues of identity and now we’re here!"

How does this work fit into the larger trajectory of McGlothlen's studies and career plans?

"I love learning and have always enjoyed thinking about thinking, both biologically and metaphysically. I enjoy tackling big abstract concepts like identity (ask my Dad… I asked him what the meaning of life was at a family lunch when I was 11) and trying to make them more graspable. For the entirety of my college career I was set on going to law school, but in the last year that’s shifted a bit. I think my end game is going to be working with kids, whether that be as a school psychologist or [an ocupational therapist] for kids with sensory integration issues... I’m still trying to sort things out."

We are confident that McGlothlen will put the talent evidenced by this double-award-winning essay to good use in whichever field she pursues. Well done!