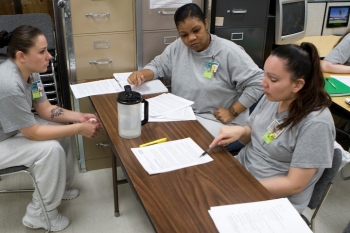 This autumn quarter graduate students Blake Hereth and Paul Tubig taught Introduction to Philosophy at the Washington Women’s Correctional Facility (WCCW) in Gig Harbor, WA. The course is college-accredited and supported by Tacoma Community College and the Freedom Education Project Puget Sound (FEEPS), which is a nonprofit organization that provides college education for incarcerated women. We asked Blake and Paul to share with us some of their experiences and reflections on teaching in prison.

What interested you in teaching philosophy to students in prison?

Paul: I take education to be a form of activism to improve the life prospects of individuals who have been marginalized and who have been historically vulnerable or demeaned. And nothing is more empowering than philosophy, which urges you to think independently and critique the very conditions of your existence in the hopes of motivating change.

Blake: I was personally drawn to the opportunity because inmates are often exploited as slave labor and are denied the opportunity to be treated autonomously. Offering students an opportunity to engage with questions that matter to them, and to treat their ideas as if they matter, is a chance I couldn’t turn down.

What were some of challenges in designing a course for students who are incarcerated?

Paul: We wanted to introduce both timeless philosophical issues, like the question of universals, and urgent contemporary ones, like the ethics of physician-assisted suicide. We developed assignments that did not require independent research, since we wanted to be sensitive to the research limitations of our students. They do not have access to the internet and the prison library is very limited, especially when it comes to philosophy literature. We also reserved the last 30 minutes of the class as “office hours”, where the students could talk to one of us individually.

What were some of the challenges in the classroom that you don’t experience at UW?

Blake: The Department of Corrections is very firm about attendance, where more than two unexcused absences results in removal from the college course. When students were absent, it was often because they had court dates, meetings with family or legal counsel.  Additionally, there were times the correctional facility would have “no movement” due to safety or security concerns, which means that incarcerated persons were forbidden to leave the areas they were currently in. Thus, students were unable to get to our class. Also there were some students being held in solitary confinement. The latter prospect is one we hadn’t planned for. How would students succeed if they were being held in solitary confinement?

How did you handle students who were in solitary confinement?

Paul: One of our students was sent to solitary confinement for several weeks. Despite her absence from class and despite being unaware that we were receiving any of the assignments she sent us, she worked continuously on her assignments: writing reflection papers, outlining the readings, preparing for the midterm exam and final paper, and so on. She had told us if it weren’t for her philosophy course, she’d become bored, misbehave, and land herself in solitary confinement for even longer periods of time. She was no exception to the rule: Our students are overwhelmingly hardworking, engaged, and bright.

Did the students surprise you?

Blake: Our first day, we gave our students a philosophical quiz to gauge their interest in various topics and see where they stood at the start of the course. (We often find that students change their minds about something by the course’s end!). One of the propositions we asked them to evaluate was this: “We should believe what’s true and disbelieve what’s false.” In our experience, this usually garners considerable agreement, and sometimes consensus. However, our students (with few exceptions) roundly rejected it. Their reason: In prison, their liberty was restricted to their beliefs; everything else was controlled by the Department of Corrections. They had a right to believe what they wanted, and thus they weren’t obligated to believe anything. Until that time, we hadn’t considered that the basic philosophical admonition to follow the evidence wherever it leads might itself be grounded in a kind of privilege: the privilege of having other liberties.

Were other philosophical discussions different from your traditional classroom?

Paul: Some philosophical discussions at WCCW had a different texture than what we have typically encountered in traditional college classrooms.  For example, the philosophical question of whether God exists and the problem of evil were especially poignant.  Most of our students were explicitly devoted to their faith in God and it sustained meaning and hope in their lives while in the facility.  Though the discussion was quite constructive and managed with great care, there was a sense of urgency in the students to maintain their beliefs against some philosophical confrontation.  Another discussion is the question of justice and its application to issues like paternalistic welfare programs.  In past courses, this discussion with students felt like the question existed in the ether.  But many students in WCCW engaged this question with a high level of competence, openly sharing their experience with the programs and informing us of the details.  So, their contribution nourished the discussion in a way that was more informed, concrete, and interesting than in our past classes.

Would you be interested in teaching philosophy to inmates again?

Blake: We’ve loved teaching at WCCW through the FEPPS program, we wish our students all the best, and we encourage others to get involved with teaching underprivileged populations. I can’t help but recall the words of one of our WCCW students who told me, tearfully, “Only the two of you believed I could succeed in a college course. And I have.” Working closely with such wonderful people and seeing them succeed in ways that others would never believe has been, as Immanuel Kant would say, beyond all price. We both hope to have the opportunity to work with FEPPS program again.

Paul:  Absolutely!  I loved my experience teaching at WCCW and I wish to teach philosophy there again!  The students are an amazing group of people.  They are deep, engaging, and very thoughtful; and it was a great pleasure to participate in the enterprise of philosophy with them.  And the students at WCCW are so admirably committed to their education to improve the conditions of their lives that I would definitely welcome the opportunity to support that endeavor.