Facts and Fake News - #philosophyresponds: Conversations After the Election 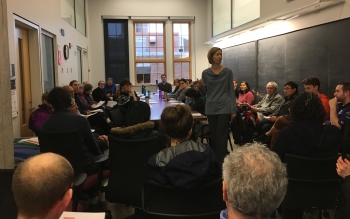 The Department of Philosophy hosted the second discussion in the series #philosophyresponds: Conversations After the Election, on Friday, February 3rd. The goal of these conversations is to think productively about how the Department of Philosophy community can reach out beyond the classroom by deploying the tools, skills, and the content of philosophy to grapple with pressing social issues.

Professor Feintzeig open the session by presenting the two of the biggest cases of concerted efforts to subvert the truth in recent history: the tobacco industry’s denial of the link between smoking and cancer from 1953 to 2004 and the fossil fuel industry’s dismissal and denial of climate change from 1980 to the present. He identified and explained four major strategies deployed for the purpose of undermining facts both then and now: distraction, infiltration, framing, and interacting in bad faith. Furthermore, he demonstrated how fake news can infiltrate into society and undermine a community and legitimate news sources.

The library has also created two evaluation frameworks for students to determine if a source is credible:

SMART
Source: For you to evaluate a source, you have to know who or what the source is.
Motive: Why do they say so?
Authority: Assess the source.
Review: Go over the story carefully.
Two-source test: Double check everything if possible.

Ask the 5 Questions:
Who? Authority
What? Accuracy
Where? Publisher
Why? Purpose & Objectivity
How? Determining What’s What

These tools can be used by anyone looking to verify a news story. The librarians urged people to use these tools to verify before sharing a news story on social media since that is how most fake news is spread today, and to inform others when they spot a posting of news story that is not credible.

Philosophy graduate student, Dustyn Addington, offered commentary on what is at stake for philosophers in the discussions led by the previous panelists.  He began by acknowledging pervasive worries and anxieties – namely, that many may feel as though the world has changed dramatically and that our typical strategies for dealing with fake news are not working or that the promotors of fake news are invulnerable. As the current administration offers “alternative facts” and calls organizations like CNN “fake news” it is harder combat a tweet or a comment that says “fake news” with a long think piece arguing against such things when the short tweet is so much more effective. Addington cited Jacob Weisberg, Editor-in-Chief of Slate, who captured this sentiment, “The press doesn’t have a strategy for dealing with Donald Trump. Part of the problem is that our heads are still spinning. We’ve never had a president who didn’t accept the existence of objective truth. We don’t know how to make him recognize that reality has an existence independent of his preference. It’s like we’re suddenly covering a post-structuralist literary theorist, albeit one with orange hair and a low golf handicap.”

Addington identified why this state of affairs is particularly paralyzing for philosophers who, he points out, love to think that by showing someone they are wrong or have contradicted themselves that they will change their minds or at least admit their error and be embarrassed. In a climate where certain discussants in the public sphere simply don’t seem to care or be negatively affected if they are called out on their falsehoods or contradictions, the philosopher’s power to critique is diminished.

But all hope is not lost, Addington contended. Since philosophers and academics are not use to debating with others who do not care when their views are pointed out to be inaccurate, Addington argued, new methods of conversation and interaction are needed. If one’s goal is political change, he suggested one might focus less on trying to prove the false claims of those who don’t value truth to be untrue, and instead find solidarity with people who have a commitment to the truth (still in the majority, Addington asserted), even if one disagrees with them politically. In the interest of finding common ground with others who value facts across political divides when challenging fake news, Addington recommends being pointed about placing the blame with the creators of falsehoods, not those with whom you’re debating. This approach, he admits, can take a great deal of time and empathy.

The discussion participants considered how best to stand up for facts in political discussions with friends and family. One encouraged others to approach discussion across political divides with openness and vulnerability (if possible), pointing out that people are more likely to listen to a different point of view when they feel like their own is being equally heard and considered – this approach can increase the chances of holding a successfully open conversation.

Our speakers reminded the group that we are living in a time when Washington State Attorney General Robert Ferguson needs to make the statement, “Alternative facts have no place in the courtroom.” In ordinary times, this statement would have no place or need in the discourse of a courtroom, however we are not living in ordinary times and it is important for everyone to remain committed to actively demanding the truth from news sources.

Please join us on Friday, February 17, 2017 from 1:30-2:30 PM for our next #PhilosophyResponds discussion, on “Recognizing and Combatting Racism and Sexism.” Our facilitators will be professors Carina Fourie and Sara Goering and PhD student Tim Brown.