Recognizing and Combating Racism and Sexism - #philosophyresponds: Conversations After the Election 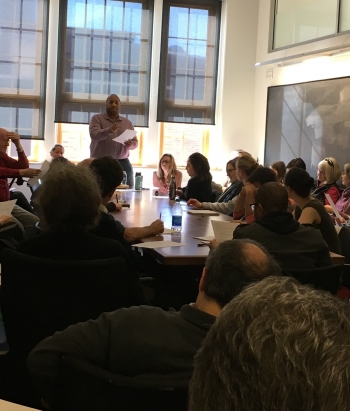 Tim Brown speaking about recognizing and combatting racism and sexism at #philosophyresponds : Conversations After the Election series.
View gallery

The third topic, “Recognizing and Combatting Racism and Sexism” was led by Professors Sara Goering and Carina Fourie and Graduate Student Tim Brown.

Tim Brown opened the session by asking us how we can support marginalized people trying to speak up against racism, sexism, etc. despite attempts to quiet them, in spite of a culture that prefers not to hear their testimony, and that may even lead such individuals to self-smother, given the sense that it’s not worth trying to be heard.  Listening to their testimony is even more important in the face of the current climate where, he observed, these same people are now targets for extreme cases of injustice in public view. In attempting to grapple with this question, Tim introduced language from the work of feminist epistemologists Miranda Fricker and Kristie Dotson—in particular, the concepts of hermeneutical injustice, epistemic violence, testimonial quieting, and testimonial smothering—as a framework to guide our thinking.

Hermeneutical injustice, in which significant areas of the social experiences of certain groups are obscured from understanding due to inequalities built into shared hermeneutical tools, is especially difficult to combat because it is difficult for some people to recognize at all. Tim explained that the newfound prevalence of terms naming types of hermeneutical injustice – such as “microagressions” and “gaslighting” – are examples of addressing this injustice by making it recognizable and comprehensible.

Next, Tim looked at the concept of epistemic violence, which is the idea that people refuse to hear or acknowledge another’s testimony due to “pernicious ignorance” (ignorance that causes harm to others in a given context). Examples of epistemic violence are: testimonial quieting, when people are dismissed as “knowers” capable of giving testimony worthy of consideration, and testimonial smothering, when a person perceives their audience to be either unable or unwilling to understand their testimony in the appropriate way, and so simply doesn’t speak. An example of this represented by the hashtag “#WhyWomenDontReport” which seeks to highlight the testimonial smothering of victims of sexual assault by the prevalence of audiences refusing to believe their accounts of their lived experiences.

Tim made a few suggestions to how we fight against racism and sexism. First, listen closely to people who are sharing their personal stories and “keep your counterexamples and clever arguments to yourself.” Second, use body language and verbal cues to discourage silence and promote uptake (e.g. maintain eye contact with the person sharing their experience of oppression and not with the person who seeks to silence them, or interrupt their testimony). And third, do not use other people’s stories as social currency. Tim advised us to learn from the experiences others share with us, but to maintain humility about our own ability to fully understand another’s testimony, and to never use another’s testimony as a way of “proving” our own level of understanding on an issue that does not directly affect us.

Sara Goering explained that in order to combat racism and sexism we must first recognize it. She pointed out that one of the things philosophers like to do is identify assumptions that are part of the norms of practice. These assumptions are often so deeply rooted in the way that we view the world and ourselves, and the way we understand other people, that we don’t even really see them anymore. Philosophy helps us pull our assumptions out and examine them closely, which can be very uncomfortable. An example of this is the tension between our intention to recognize many different genders with the realization that the existing limitations of our language make it very difficult to communicate these differences. In this way, a binary understanding of gender seems hard-wired into our very means of communicating. Professor Goering noted that racism and sexism also often function in ways that are challenging to recognize. How do we recognize our assumptions? In order to combat this, Professor Goering argued that it is very important to talk with others about our experiences in order to gain confidence in our own ability to determine what has happened. This is all the more important in cases when a person feels isolated in their experience, or when others are gaslighting them with alternative versions of what they experienced. Giving voice to lived experiences of racism and sexism can work to counteract opposing forces that seek to obscure these experiences or deny their existence.

Carina Fourie discussed the constructive role philosophy can have in everyday conversations about politics. One conversation had by many people after the election was “if you voted for Donald Trump you are a racist” or in response, the denial, “no, if you voted for Donald Trump you are not necessarily racist.” She offered an approach for analyzing these conversations and made suggestions for how to revise one’s approach to similar types of conversations in the future. Professor Fourie broke down the arguments of these statements addressing the problems with both. She ultimately suggested that the argument in question should be reframed not to focus on the identity of an individual voter as “racist” or “not racist” but rather in terms of an individual’s “duty to fight racial injustice.” Such a duty, she argues, is weighty, especially if you are privileged in society. Who you vote for and, more generally, who you support should be someone who will combat racial injustice, and more generally, oppression. She concluded with the consideration that people should avoid being self-righteous as not voting for or not supporting any particular candidate in itself is far from sufficient for meeting our duties of fighting injustices. She also questioned to what extent many people realize that they have duties of justice or understand how oppressive society is, and what could be done about this so that people would be more likely to fulfil their duties to combat injustice in the future.

The participants led a great discussion on further ways both large and small to combat and recognize racism, sexism and injustices in general, and encouraged the group to continue this conversation with others. To explore further philosophical thoughts on these matter please consider reading the following books:

Epistemic Injustice: Power and the Ethics of Knowingby Miranda Fricker

Please join us on March 17th for #PhilosophyResponds: Conversations After the Election at 1:30 PM outside of Savery 361 when Professor Bill Talbott and graduate students Sam Sumpter and Lydia Ramirez will lead us in a conversation about Civil Disobedience.