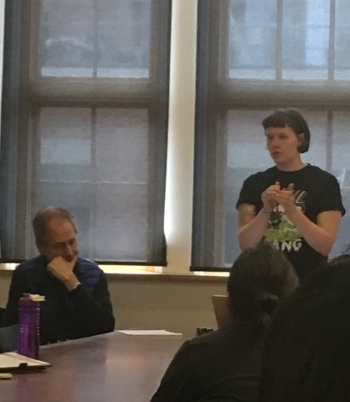 Bill Talbott opened the session by offering a definition of ‘civil disobedience’ – an action that intentionally and publically breaks the law in order to communicate a specific message.  Civil disobedience is distinct from other illegal behavior, Bill explained, in three specific ways: actors engaging in civil disobedience 1) announce their plans to break the law ahead of time; 2) provide a clear rationale (typically based on justice claims) for their planned action; and 3) are prepared and willing to accept punishment for their actions. In order for civil disobedience to be possible and effective, Bill explained further, it must happen within a context of relative freedom of expression. It is also important that there is an audience for an act of civil disobedience, as the intention is to elicit empathy from an audience with the action in order to effect social change. For this reason, Bill suggested, non-violence has historically been an important characteristic of acts of civil disobedience, as violence would reduce the desired empathy-effect of the action. In fact, the willingness to accept punishment for the action is important for this same reason, to elicit empathy from observers in order to draw attention to particular injustices. It is this process of evoking empathy in others through action that makes acts of civil disobedience a form of communication that adds power to a movement.

Sam Sumpter posed the question whether upholding a system of democracy requires that we accept the results of democratic system or if it requires that we object to the results when they are objectionable. Ideally we would want a balance of accepting the outcome and objecting anything that is seen as unjust. Sam argued that while it is foundational that we accept the results of the democratic process under normal circumstances, we are not currently in ‘normal circumstances.’ As evidence that our current situation is not ‘normal’, Sam pointed to the possibility that an outside government may have influenced this election. Another abnormality, is Trump’s all-out war against the free press. In this case, if we care about a democratic process we must object when we see things that are objectionable.

Bill ended the presentation by reassuring those in attendance that although many people feel powerless in our society, based on his previous experience with social justice movements in the 20th century, acts of people working together to fight injustices can have real impact and empower individuals.

The Department of Philosophy hopes to continue series like Conversations After the Election in the future. Please email us if to be informed of about talks in the future.