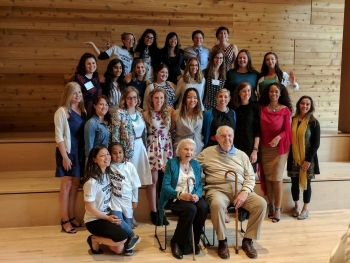 This summer the UW Women’s Center held the Alene Moris National Education for Women’s (NEW) Leadership workshop. The NEW Leadership is a national bi-partisan program developed by the Center for American Women and Politics at Rutgers University to address the underrepresentation of women in American politics. Its goal is to educate college women about the important role of politics in their lives and to equip them with the tools and confidence to become active and effective leaders in the civic and political arena on local and national levels.

Senior philosophy major Nicola LaGuardia attended the workshop with funding of the Department of Philosophy’s Michael Podlin Endowment for Student Support. And she had this to say about the conference:

My cohort was composed of a wonderful group of tenacious, like-minded, but diverse women. We had the privilege of listening to and engaging with influential members of our community and participating in workshops that allowed us to develop skills such as salary negotiation and networking. I am thankful to the Department for providing me with the funding to have this transformative experience. The NEW Leadership Institute allowed me to develop my professional skills and has spurred me on to pursue my professional and personal goals in the face of a system that traditionally does not favor women.

We wish Nicola the best of luck and look forward to seeing her work in the future and hopefully her name on the ballot!