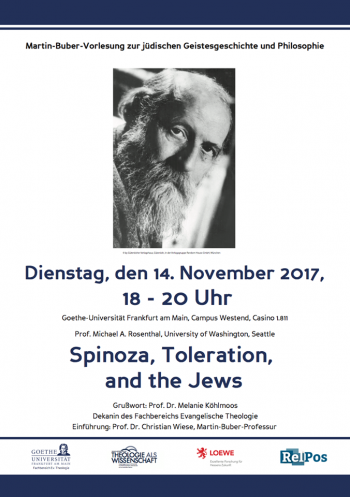 Professor Michael Rosenthal will be giving the “Martin Buber Lecture on Intellectual History and Philosophy” at the Goethe University in Frankfurt on November 14th. He will be presenting “Spinoza, Toleration and the Jews.”

Spinoza was banned from the Jewish community in Amsterdam in 1656 because of his “horrendous heresies … and evil opinions.”  In 1670 Spinoza published an anonymous text, the Tractatus Theologico-Politicus, which immediately became notorious for its critique of Scripture, its theory of church-state relations, and its passionate defense of freedom of thought.   Since then Jews have often vehemently disagreed over the man and his ideas.  Was he, for instance, a self-hating Jew who sought to undermine the Jewish community, as Hermann Cohen asserted, or someone who should be posthumously decreed an honorary citizen of Israel, as Ben Gurion claimed?  In this lecture, Michael Rosenthal will  examine four interpretations of this text, each of which stems from a different place and time, and offers an importantly different view of religious toleration in general and a vision of Jewish life in particular.   Some of the main questions that he will discuss are:  What did he think was the place of the Jews in the Dutch state of his time?  Is Spinoza a revolutionary who wants to abolish religion?  Or is he a reformer, who offers a way to accommodate religious life to a national state?  Is Spinoza a proto-Zionist?  Or is he a theorist of the diaspora?  Rosenthal will show how the Tractatus Theologico-Politicus has been read as a blueprint for Jewish life and how the very conflicts over its meaning reveal the tensions within Jewish modernity.

Michael is currently on leave and a Fellow at the Forschungskolleg für Humanwissenschaften [Research Institute for the Humanities] of the Goethe University in Frankfurt.