Register for the Philosophy of Probability Workshop 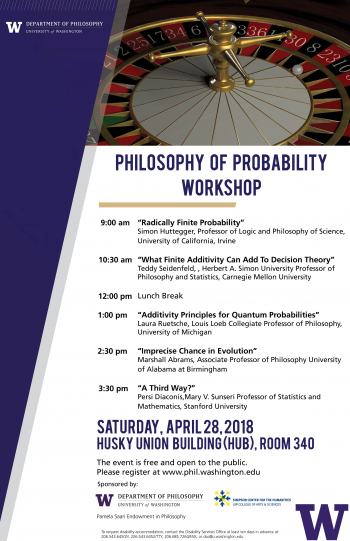 This event will bring together philosophers, mathematicians, and scientists for a one-day workshop on April 28, 2018 to critically examine interpretations of probability theory in its many and varied applications. Probability theory is used widely in stochastic and dynamical systems, statistical and quantum physics, theories of rationality in epistemology, and theories of evidence and inductive inference in statistics and philosophy of science. It often happens that results or viewpoints from certain applications of probability theory, which would be immediately useful in other areas, go unnoticed due to lack of communication between isolated research communities. For this reason, the purpose of this event is not just to rehash well-known debates between Bayesian and frequentist approaches to probability, but rather to put researchers with different views on probability theory in conversation. The event will serve to open channels of communication between researchers in different fields working on related questions in the foundations of probability theory.

Register for the workshop here.

Abstract: We examine general decision problems with loss functions that are bounded below. We allow the loss function to assume the value infinity. No other assumptions are made about the action space, the types of data available, the types of non-randomized decision rules allowed, or the parameter space. By allowing prior distributions and the randomizations in randomized rules to be finitely-additive, we prove very general complete class and minimax theorems. Specifically, under the sole assumption that the loss function is bounded below, we show that every decision problem has a minimal complete class and all admissible rules are Bayes rules. We also show that every decision problem has a minimax rule and a least-favorable distribution and that every minimax rule is Bayes with respect to the least-favorable distribution. Some special care is required to deal properly with infinite-valued risk functions and integrals taking infinite values.

Abstract: The question of whether personal probability functions should be countably or (merely) finitely additive has been extensively debated. We ask a different question: what additivity principles govern physical, specifically quantum mechanical, probabilities? Taking this to be a question about what quantum states are physically realizable, we present a “transcendental” argument in favor of countable additivity. In order for us to have evidence supporting quantum mechanics (the argument goes), the probability functions induced by quantum states must be countably additive. Otherwise, we could never prepare systems in specific quantum states, where such preparation is a precondition for collecting evidence confirming the theory. Although our focus is physical probabilities, reflecting on state preparation allows us to draw a few quick and polemical morals concerning rational credences about quantum events. First, the Principal Principle is otiose. Second, Bayesian personalists tempted by de Finetti’s arguments in favor of merely finite additivity indulge that temptation at their peril. Finally, it is also at their peril that personalists pursue operational approaches to quantum mechanics (e.g. POVMs, effect algebras, etc.).

Abstract: The Bayesian/frequentist debate has danced along for hundreds of years with little progress. In a little known paper, Von Mises suggested a different approach. Probability is part of mathematics. The connection between the mathematics and the real world should be treated in the same way as the connection between geometry and the real world or between mechanics and the real world. After all, no one measures straight lines and there are no real triangles. No one can measure actual velocities, just approximations using difference quotients. Yet trigonometric computations and so on work pretty well in broad generality. I think that this is the way most working statisticians think and find it interesting that this position has not been developed. I'll do the best I can.