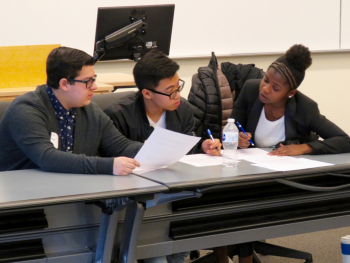 The UW Center for Philosophy for Children hosted the fifth annual Washington State High School Ethics Bowl on February 3rd at the UW Law School. The Center is appreciative for the generous support of Department of Philosophy faculty, students, alumni and friends who volunteered their time as judges, moderators and team coaches. Over 100 high school students and about 50 lawyers, judges, UW faculty, staff, and graduate and undergraduate students, and high school teachers were involved.

The Washington State High School Ethics Bowl is a competition in which teams analyze a series of wide-ranging ethical dilemmas involving topics such as cheating, plagiarism, peer pressure, relationships, and abuse of social media. Ethics Bowl is similar to debate, although in Ethics Bowls teams are not forced to take adversarial positions or to hold fast to an assigned perspective. Instead, students have a forum in which to engage in dialogue, and they are judged on the quality of their analysis and the degree to which they engage in a thoughtful, civil exchange.

Although the High School Ethics Bowl is competitive, it is intended to promote collaboration. Teams do not have to take pro/con positions; in fact, they can agree with each other. They are not required to refute each other’s points, but rather to offer commentary on one another’s arguments. Teams are judged according to the quality of a team’s reasoning and how well team members organize and present their cases, analyze the case’s morally relevant features, and anticipate and preemptively respond to commentary and questions. Judges for the Washington State High School Ethics Bowl are drawn from the local legal, education, and philosophical communities.

The judges were impressed with the analytic skills and commitment to thinking deeply of all of the students who participated. And the placement of the teams into the finals was extremely competitive. Congratulations to our winning teams and to all the schools that participated.

The first, second, third place teams and the winners of the Award for Civil Dialogue will also take part in “Olympia Day” on May 17th, where they will listen to the oral arguments of a case about charter schools at the Washington State Supreme Court (Charter schools were featured in the case of the final round at the Washington State Bowl), meet and have lunch with the Supreme Court Justices, meet the Governor and Lt. Governor, and tour the Legislature Building.

Director of the Center for Philosophy for Children, Prof. Jana Mohr Lone and two students who participated in the Ethics Bowl were featured on NPR station KNKX’s story “In Polarized Times, the Ethics Bowl Embraces the Gray Areas.”  They discussed the value of the Ethics Bowl and gave a mini demonstration based on one of the cases from the February Bowl.