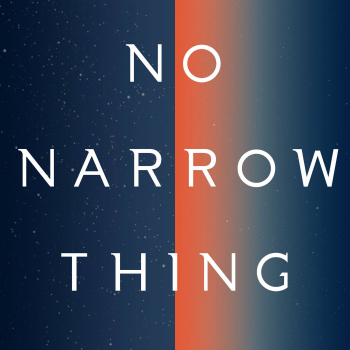 Each episodes focuses on a single line of inquiry, such as:

-Is there a duty to vote?

-Should I believe in ghosts?

-Is it ethical to gossip?

No Narrow Thing treats philosophy as something you do, approaching philosophical inquiry with a sense of eager discovery. Dustyn and Whitney invite academic experts, on-the-ground practitioners, and community members to weigh in on the questions that matter most. No Narrow Thing was made possible by funding from the Melvin Rader Endowed Fund in Philosophy at the University of Washington, which supports innovative projects in philosophy beyond a graduate student’s dissertation work.

We asked Dustyn and Whitney to answer some questions allowing us to explore what inspired their podcast, the challenges of going from graduate student to podcaster and what No Narrow Thing will explore in the future.

Why did you want to create a philosophy podcast?

Dustyn: I’ve been a fan of podcasts for about a decade. I love the absence of gatekeepers and, as a result, how personal and experimental podcasts can be. We also sensed a gap in philosophical media. Most philosophy focused on explaining a philosophical view or debate, without showing off the philosophical process: the trial-and-error, the fun of grasping a new idea, the give-and-take of a philosophical conversation. We felt that sense of discovery that comes with philosophical work wasn’t fully represented.

Whitney: I would echo Dustyn’s description and also say that as someone not well-versed in philosophical study or history, it was an intriguing topical focus and framing that allows us to engage with a range of issues (from the more lighthearted to topics we’re more passionate about or that may be more serious) while touching on formal philosophical structures and theories that I’m unfamiliar with. The ability to continuously learn about philosophy both in terms of process and formal branches of theory was really appealing to me personally.

What is your podcast format and how did you decide upon that style?

Dustyn: No Narrow Thing is an hour-long show that comes out weekly. We pick a particular question or topic, usually inspired by something culturally relevant like a movie or think piece, or just something happening in the news. Sometimes it’s just what we’ve been personally wondering about. We then discuss the topic without too much of a plan ahead of time, trying to recreate what Robert Solomon describes as “the heart-felt confusion and excitement that originally brings us all to philosophy.” It took a lot of brainstorming and trial-and-error before we landed on this format. We started with a more structured and formal style, but found that neither fit our goals nor our styles of exploring a question.

Whitney: I’d add that getting to our current structure included a lot of learning about the need to focus on a particular question and try to set up boundaries in the conversation while still allowing for the discussion to be spacious enough for us to explore new ideas and discover new thoughts and opinions in the moment. I think we’re still learning best practices for us within this style and how to engage with guests and ourselves in a way that can be organic and allow for novel momentum within the conversation while also having a plan and having well-researched the issue or question at hand. Also--figuring out the balance between appropriate topical boundaries and being comfortable within the limits of our particular expertise and knowledge.

What has been your favorite(s) episode(s) so far?

Whitney: We’ve had such a wide range of episode topics, it is difficult to select one. I enjoyed our earlier episodes where we were able to interview Jana Mohr Lone on philosophy for childrenand also where we talked about the nature of authenticity via the personality of Guy Fieri, because Guy Fieri is just great fun.

Dustyn: This is a hard one. Each episode represents us figuring something out about the show, getting a little better or learning from our mistakes. But I think two Black Mirror episodes (#13 and #14) hit the target the best. I think they focus on inherently interesting questions, there’s a sense of enthusiastic discovery throughout, and we get to talk about a great TV show.

What episodes are you excited to do in the future?

Dustyn: We have a long list of topics, but we’re looking forward to doing episodes on gentrification, the “Dark Enlightenment” philosophy that is percolating in Silicon Valley, and belief in extraterrestrials.

Whitney: Very much excited for our future aliens episode! Also I’ve been thinking about how to design episodes around questions of borders/borderlands, Sanctuary, the changing landscape of the local news, and spatial memory.

How do you prepare for the podcast?

Whitney: Usually we start out with a source document or set of source materials whether they’re articles or other media and loosely lay out a structure of conversation that touches on a larger question. Sometimes we start with a particular question that is especially on our mind or has been intriguing for a while and investigate that through further research, or find a specific cultural touchstone that resonates with that question from which we can start our inquiry.

What are some of the favorite questions or comments you have gotten from your listeners?

Dustyn: One listener said, “It’s so Socratic!” which is one of the best compliments I can think of. We’re really trying to mimic the kind of conversations Socrates had on the streets of Athens, but in Seattle in 2018. Less hemlock, fortunately.

What has surprised you the most about making this podcast?

Whitney: A big learning experience for me was just how difficult it is to get the balance of structure versus discovery right for an episode and realizing the challenge to being present in the conversation within all the distractions of the logistics and physicality of recording.

Dustyn: The amount of time it takes to make audio sound right. It’s really not enough to just record human voices and then distribute them. They just don’t sound like they do in real life without some editing with audio software. Picking topics and coming up with interesting questions isn’t terribly different from developing a new syllabus, but preparing for a conversation that can go anywhere with a colleague rather than a student is a different skill altogether.

What are some of your favorite podcasts?

Dustyn: I tend toward comedy podcasts like Doughboys and Hollywood Handbook, but I also really like Invisibilia, Reply All, and Switched on Pop. YouTube channels like Every Frame a Painting were also really inspiring.

Whitney: Well, Dustyn’s got me hooked on Doughboys now. I’m also a fan of Crimetown, 99% Invisible, Reply All, How Did This Get Made?, Still Processing, and some other fiction/storytelling podcasts.

In “The City: History vs. Development” episode you talk about how policy is being made based on philosophical constructs by people that might not have philosophical training, in an ideal world what training would you like to give government policy makers?

Whitney: I love this question. I think so much underlying both policy-making and the framing of policy decisions are unaddressed philosophical questions and positions, and understanding that would perhaps help us to have better conversations about differences in policy and even would contribute to a broader understanding of the difference between policy and politics. Ultimately any kind of shift in norms that would encourage and value constructive questions in the public sphere would benefit the relationship between citizens and their representatives. I’m not sure what specific training or vehicle would succeed in this outcome but for anything to succeed it would need to be broadly rather than narrowly targeted, and a process of inquiry as well as relationship, so that we’re encouraging both questions and kindness.

Dustyn: This is a great question. I would like to see greater sophistication when it comes to dealing with ethical arguments. When disagreements are found to be based on values or ethical commitments, non-philosophers see that as a reason to stop engaging since they see ethical disagreements as frustrating and intractable. I would like philosophers to help policy makers, and the general public, become better able to reason about values. This, in addition to some critical thinking training, would be near the top of my list.

Thank you Dustyn and Whitney for sharing insights into your podcast. We are looking forward to listening to future episodes of No Narrow Thing.

Subscribe on Apple Podcasts or your favorite podcast app to receive No Narrow Thing every Wednesday, completely free. For more information, visit NoNarrowThing.com.