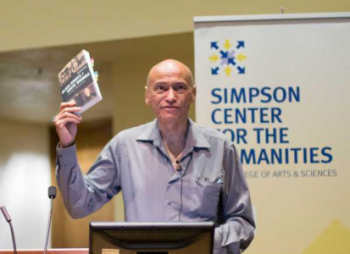 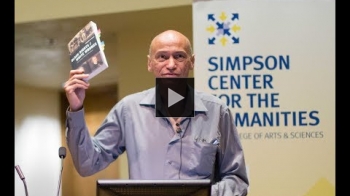 (This article was originally published on the Simpson Center website.)

Philosopher Charles W. Mills spoke on "Liberalism and Racial Justice" in a Katz Distinguished Lecture in the Humanities on Wednesday, May 16, in Kane Hall 210. The lecture is part of year-long series on Capitalism and Comparative Racialization that includes visits by Khalil Gibran Muhammad, Neferti Tadiar, Tianna S. Paschel, Shireen Hassim, and Robin D. G. Kelley, who spoke in November 2017 on the question "What is racial capitalism and why does it matter?" (video).

Charles W. Mills is Distinguished Professor of Philosophy at the CUNY Graduate Center. He works in the general area of social and political philosophy, particularly in oppositional political theory as centered on class, gender, and race. In recent years he has focused on race. He is the author of numerous journal articles and book chapters, as well as five books. His first book, The Racial Contract(1997), won a Gustavus Myers Outstanding Book Award for the study of bigotry and human rights in America. It has been adopted widely in hundreds of courses across the United States, not just in philosophy, but also in political science, sociology, anthropology, literature, African-American, American Studies, and other subjects. His second book, Blackness Visible: Essays on Philosophy and Race(1998), was a finalist for the award for the most important North American work in social philosophy of that year. He is also the author of From Class to Race: Essays in White Marxism and Black Radicalism (2003); Contract and Domination (co-authored with Carole Pateman, 2007), and Radical Theory, Caribbean Reality: Race, Class and Social Domination (2010). His sixth book, Black Rights/White Wrongs: The Critique of Racial Liberalism, is forthcoming from Oxford University Press.

Mills says: How should political progressives relate to liberalism, the now-hegemonic global political ideology? As my title indicates, I think we should try to retrieve liberalism. However, this will require more work than conventionally assumed. My basic claim will be that once we recognize, in full depth and detail, how illiberal actual historical liberalism has been, we will need not merely to remap our conventional periodizations, but to rethink the received account and characterization of liberalism as a political ideology, its ontology and axiology, with corresponding implications for how we should theorize about justice in the social contract tradition. I will use as my example racial justice. Obviously, then, I have two sets of opponents, those who think liberalism needs no rethinking and those who think liberalism is hopeless and cannot be retrieved (some Marxists, communitarians, post-structuralists, multiculturalists, post-colonial theorists).

The Simpson Center also hosted a colloquium with Mills, "Black Radical Kantianism," at 1:30 pm on Thursday, May 17, as an opportunity for discussion.