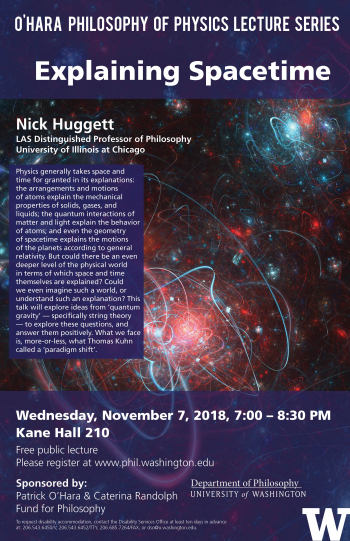 Join us for Explaining Spacetime, Nick Huggett, LAS Distinguished Professor of Philosophy, University of Illinois at Chicago on November 7, 2018, in Kane Hall Room 210 at 7 pm, part of the O'Hara Philosophy of Physics Lecture Series

Physics generally takes space and time for granted in its explanations: the arrangements and motions of atoms explain the mechanical properties of solids, gases, and liquids; the quantum interactions of matter and light explain the behavior of atoms; and even the geometry of spacetime explains the motions of the planets according to general relativity. But could there be an even deeper level of the physical world in terms of which space and time themselves are explained? Could we even imagine such a world, or understand such an explanation? This talk will explore ideas from ‘quantum gravity’ — specifically string theory — to explore these questions, and answer them positively. What we face is, more-or-less, what Thomas Kuhn called a ‘paradigm shift’.