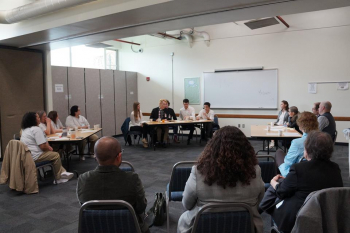 Doctoral candidate Paul Tubig organized the first ever Intercollegiate Ethics Bowl at the Washington Corrections Center for Women (WCCW) on April 14, 2019. The Freedom Education Project of Puget Sound (FEPPS) and University of Puget Sound teams discussed questions such as: Should we bring back species that have been driven to extinction? Are laws allowing terminally ill children to choose euthanasia morally defensible? Is China’s social credit system, which assigns a social credit score based on behavior, morally justified? Do wealthy nations owe a climate debt obligation toward less-wealthy nations?

FEPPS provides a rigorous college program to incarcerated women and transgender and gender nonconforming people in Washington and creates pathways to education after they are released from prison. The purpose of FEPPS is to promote the importance of quality higher education opportunities to people in and after prison. Education is one of the most important factors in breaking cycles of poverty and incarceration. FEPPS aims to use college in prison as a vehicle to foster economic stability, increase future educational attainment, and develop life skills and confidence in students.

Paul Tubig, who co-taught Introduction to Philosophy last year through FEPPS at WCCW, wanted to bring the ethics bowl to the WCCW in order to provide his college students there with the same access to this meaningful experience as non-incarcerated college philosophy students. Participating in an ethics bowl, he explains, is valuable because it fosters the civic virtues of open-mindedness, empathy and critical thinking. Furthermore, Paul believes that bringing the Intercollegiate Ethics Bowl to WCCW demonstrated to all participants that incarcerated persons have important voices to contribute to ethical debates, from which we can all learn. 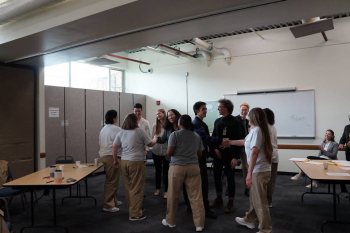 The FEPPS team was now ready for the official ethics bowl. They competed against the University of Puget Sound’s team, coached by Ariela Tubert. Paul randomly chose which of the 10 cases would be chosen for the bowl. The first round cases were: de-extinction and a child’s right to die. The second round cases were: China’s social credit system and climate debt. Both teams made excellent philosophical commentary leading to the FEPPS team winning the first round and the UPS team winning the second round. With the teams so closely matched, the winner was determined by the total points in each of the rounds, with UPS coming out victorious with a total of 254 points, closely followed by FEPPS with 250.5 points. Paul is extremely proud of the FEPPS team’s performance and how close the score was between the two teams.

The ethics bowl was made possible by the Melvin Rader Summer Project Stipend which helps fund innovative philosophical projects that contribute to the awardee’s scholarship, teaching, and/or professional development. We are happy to announce that Paul has been awarded a second Melvin Rader Summer Project Stipend and will be organizing the second FEPPS intercollegiate Ethics Bowl in 2020!