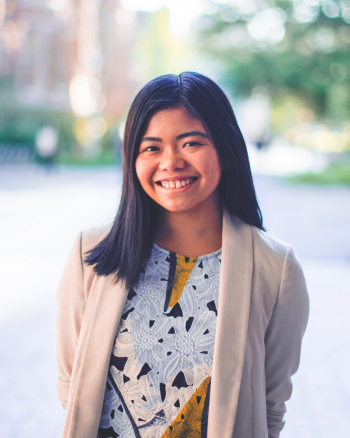 Angelia Miranda, a double major in philosophy and international studies, will embark on the adventure of a lifetime next year as a 2019 Bonderman Fellow. Each year, a small group of University of Washington students are awarded with Bonderman Travel Fellowships, which fund independent travel in order to “inspire individual transformation by expanding the fellow’s understanding of themselves and the complex, diverse and interconnected world we live in.” Bonderman Fellows commit to traveling alone for at least eight months, to at least two continents, including six different countries. While most fellowships relate to academic study or graduate research, the Bonderman is unique in its focus on personal exploration and development. Indeed, recipients are not permitted to participate in a program or organization, or engage in any formal study at a foreign university, or conduct research while traveling. The fellows are encouraged to introduce themselves to new areas of the world, cultures, and people.

During her fellowship, Angelia will travel solo to Turkey, Mongolia, China, Cambodia, Laos, Thailand, Argentina, and Chile. She has shaped her itinerary to trace a path alongside local celebrations of cultural, religious, and historical importance. She is excited to experience these celebrations as well as the daily rhythms of life in diverse and new settings. This will be her first significant international journey since immigrating to the US as a young girl.  As an aspiring advocate in public policy and law, she hopes to gain a deeper understanding of those whose backgrounds and identities differ from her own in order to better defend those in the world who are marginalized, underserved, and misrepresented. Angelia also hopes to discover sources of human resilience in the face of economic, geographic, and cultural challenges.

We asked Angelia to tell us more about her plans and how she became a Bonderman Fellow:

How did you learn about the Bonderman Travel Fellowship?

I started receiving emails about the Fellowship during my first year at UW. In my second year, I heard rumors from my friends about this dream program that pays you to travel. It wasn’t until my third and last year that I started to genuinely look into the Fellowship and think about applying. It took a little while to convince myself that I could be considered a candidate for such an amazing opportunity, but I’m so glad that I took the chance.

How did you pick where in the world you want to travel?

To find a starting point, I thought about places in the world that had captured my imagination in the past—countries and adventures that were stuck in my head as points of fascination. That gave me checkpoints in Mongolia, Russia and China via the Trans-Siberian Railway, Buenos Aires, and Cambodia. From there, I thought about what kind of path could possibly link these disparate places. In my research, I started to notice the dates in which certain countries along the way celebrated their independence days, religious holidays, and cultural traditions. Eventually, I was able connect the places on my initial list with a path that followed celebrations of historical, cultural, and religious importance. I realized that by doing so, I had stumbled upon an opportunity to engage with different global communities at their proudest, happiest, and most inter-connected moments. It was this idea that then became the driving force behind my proposed itinerary.

What is your past travel experience?

I like to joke that immigrating to the U.S. was my last significant travel experience. But in many ways, it’s true. I was born in the Philippines, came to the U.S. at a very young age, and never really left after that. In my proposal, I wrote about feeling like “an immigrant by name and nothing else.” For me, traveling as a Bonderman Fellow is a chance to reclaim that feeling, redefine my relationship to the region I was born in, and to better understand where it is that I truly call home.

What languages do you speak?

Despite spending my early childhood in the Philippines, I grew up only learning and speaking English. I studied French in community college and at UW, and still hope to one day finally learn Tagalog—if only to understand when my relatives are making fun of me. Before I leave for my Bonderman travels, I am working in New York City for a year as a Fellow with the Work First Foundation, so I hope to spend some of that time learning basic words and phrases from the countries on my itinerary.

What do you hope to gain from your travels?

More than anything, I hope that I learn how to be okay…on my own…and just as I am. When I applied, I was in the midst of this overwhelming stress and anxiety about graduating. Up until that point, my entire life had been planned out to achieve the end goal of graduating with honors from a top school. Now that the goal was just about finished, it felt as if I didn’t know what to do without some external objective to motivate me, which worried me. So I applied for the Bonderman, because the idea of traveling alone for eight months terrified me, and I knew that if I could challenge myself to overcome that fear, I could be more capable to take on anything.

Have you talked to any past Fellows about their experience?

Yes! The Bonderman Coordinators do a great job of organizing events where incoming Fellows can mingle and meet with past Fellows. In speaking with past Fellows, it was certainly interesting to talk about where our journeys would overlap and any tips they had, but what I enjoyed the most was hearing about how their journeys had impacted their lives. For example, many of them make a point to spend time travelling independently and with family. As someone who is often stereotyped as a workaholic who lets work take over her life, I also hope that the Fellowship helps me learn to be more intentional about making time for things outside of my work and career.

Where are you most excited to travel to?

The very first thing I put on my list, way back when planning my itinerary was something I was doing for fun during winter break, was to take the Trans-Siberian Railway all the way from Russia, stop in Mongolia, and then carry on to China. As for how the idea popped into my head, I have to admit: I loved reading Agatha Christie’s Hercule Poirot novels as a child, and Murder on the Orient Express was always my favorite.

What are your plans when your travel fellowship is done?

By that time, I will have spent almost two years away from home, so the first plan is to see my family. Then—with the exact order still to be determined—I hope to continue the research I started with my undergraduate thesis on South African Equality Courts and attend law school to become a public defender.