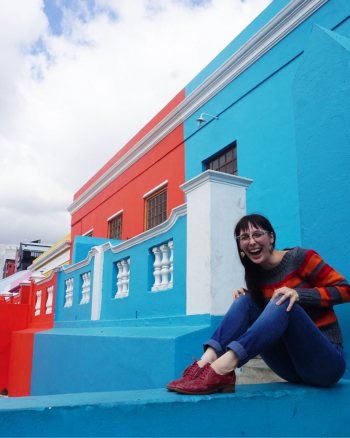 Hannah Martens is among four undergraduates to earn the prestigious Dean’s Medal from the University of Washington College of Arts and Sciences. Hannah, who received her bachelor’s degree this spring, double-majoring in philosophy and in law, societies, and justice, with minors in bioethics, disability studies, and ethics, was named the Dean’s Medalist in the Social Sciences division for her academic excellence and leadership.

From her first quarter at the University of Washington, Hannah has challenged herself with advanced coursework and a rigorous program of study. She began pursuing 400-level advanced undergraduate philosophy courses as a freshman and pursued graduate level seminars with the same rigor as our graduate students by her sophomore year. According to Professor Sara Goering, “Hannah is the epitome of a top university student – high GPA, clear evidence of academic curiosity and breadth, success in focused independent scholarly research projects, and a strong commitment to social justice.”

During her sophomore year Hannah was invited to join the neuroethics research group as an undergraduate research assistant (a role traditionally only offered to select juniors or seniors). As part of the research group Hannah met weekly with faculty, postdocs, and graduate students; led a group discussion at least once per quarter on recent journal articles; and helped with group projects, including helping to develop the center’s agency-based interview guide. She was awarded the summer research experience for undergraduates (REU) at the Center for Neurotechnology and co-authored two commentaries for the American Journal of Bioethics, Neuroscience with PhD Candidate Tim Brown, who has served as her mentor since her freshman year.

On top of all of this, Hannah is a first-generation college student who has worked more than one job during most of her years at UW, often spending the mornings at her food service job and her afternoons as a writing center tutor for both the Department of Philosophy and the Department of Law, Societies and Justice.

Beyond her work in philosophy, Hannah took part in a study abroad service learning program, offered by the Disabilities Studies Program, where she traveled to rural parts of South Africa with Professor Mark Harniss. There, she and other participants looked at access and barriers to health care, rehabilitation, and assistive technology and engaged with those issues through the lens of global health and international human rights.

During her time at UW, Hannah was invited to participate in the Philosophy in an Inclusive Key Summer Institute at MIT and the Summer Program for Woman in Philosophy at UC San Diego. Hannah has also been awarded the Department of Philosophy Outstanding Undergraduate Award her sophomore year, the Kenneth Clatterbaugh Scholarship her junior year, and the Graduate Student Choice Award her senior year as well as being elected to Phi Beta Kappa and graduating with departmental and interdisciplinary honors.

Congratulations Hannah! You will be missed at the Department of Philosophy and we wish you all the best in your next endeavor – doctoral studies in philosophy at the University of Illinois at Chicago!