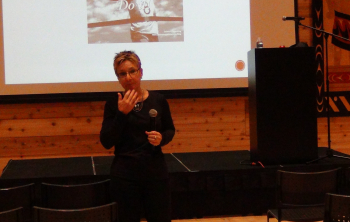 Professor of Philosophy Cheshire Calhoun (Arizona State University) gave the Program on Ethics’ Annual Ethics Lecture on November 1, 2019. Calhoun’s talk, “Responsibilities and Taking on Responsibility,” explored the ways in which what we are morally obligated to do is different from what we take on responsibility for.

The former category — what we are morally obligated to do — moral duties which we are expected to meet; failure to perform them is typically blameworthy. The latter category — what we take on responsibility for — is one Calhoun argues has been (unfortunately) widely neglected in moral philosophy (she distinguishes it from imperfect duties, which are still duties and obligatory in some sense). When we take on responsibilities, we put ourselves forward (i.e., we volunteer) to tackle problems not, morally speaking, already assigned to us. We are not morally expected or obliged to perform these responsibilities and, as such, gratitude is appropriate when we do.

Take the case of the writer David Sedaris, who has taken on responsibility for cleaning up trash in the countryside around his English home, sometimes walking over 20 miles per day as he picks up - and trail-side trash. He does not have any official role, and the trash is not in any obvious way his problem; nonetheless, he has assigned himself the ownership to that end. As he says, “it’s a problem I’ve adopted.” Still, Calhoun suggests that no one should be entitled to rely on him for trash pickup. Without any moral imperative, he’s adopted an end “in a context in which there is a justification for thinking that someone needs to adopt this end” and yet no one is assigned the role. Calhoun wants to encourage moral philosophers and people to explore this significant realm of non-obligatory responsibilities, as a way to answer the question, “Who is to do what someone needs to do?” (She confessed that this interest may come in part from being a person who has taken on significant responsibility in the profession of philosophy and in her own department, and wishing that moral theory could say more about the value of taking on responsibility, what is owed when it is done, and how to motivate more of it.)

For those interested in learning more about Calhoun’s work, check out her most recent book, Doing Valuable Time: The Present, the Future, and Meaningful Living (Oxford University Press), with essays on hope, boredom, commitment, finding meaning in life, and contentment with imperfection. ­