O'Hara Lecture in Philosophy of Physics: Emergence and Naturalness 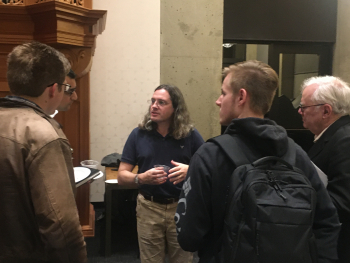 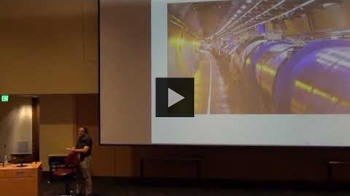 "Emergence and Naturalness," Professor David Wallace, University of Pittsburgh
Professor David Wallace (Mellon Chair, Pittsburgh HPS & Philosophy) gave the O'Hara Lecture in Philosophy of Physics on Nov. 21, 2019.  Wallace's talk "Emergence and Naturalness" argued that a condition called 'naturalness' is an essential component of extant explanations of how of physical systems at different scales fits together (e.g., small scale quarks compose larger scale protons and neutrons). Wallace argues that although the naturalness condition and arguments based upon it appear justified, they lead to conclusions in conflict with the results of our best experiments.
Wallace argued that the naturalness condition is correctly understood important part of our physical explanations of how behavior on larger scales emerges from smaller-scale phenomena. Wallace first illustrated this through the example of the emergence of thermodynamic behavior (e.g., the ideal gas law) from the typically more complex mechanical behavior of smaller-scale gas particles. Wallace argued that conditions analogous to naturalness are required even to explain the emergence of thermodynamics, even though discussions of naturalness have mostly been restricted to high energy physics and the term is rarely used outside that context.
He then showed how when the naturalness assumption is made in the context of the standard model of particle physics, arguably the best confirmed physical theory to date, it leads to a serious foundational problem. The naturalness assumption allows physicists to determine that certain parameters in our physical theories, called relevant parameters, are clues to where we expect our current physical theories to fail. Since the mass of the Higgs boson is one of these relevant parameters, physicists believed that probing scales beyond that defined by the mass of the Higgs would lead to new discoveries. In other words, we expected new data from the Large Hadron Collider at CERN to tell us that the standard model of particle physics is incorrect. It was then a surprise that, since the discovery of the Higgs Boson in 2012, the data has only confirmed the standard model and given very little indication of how to proceed beyond it. The naturalness assumption thus leads to a clash with our experimental investigations. Wallace concluded by arguing that since the argument based on the naturalness assumption appears to be sound and yet its conclusion is incorrect, this shows us that there is a very deep puzzle in the foundations of contemporary physics.
News Category:
Prospective Students
Support Philosophy