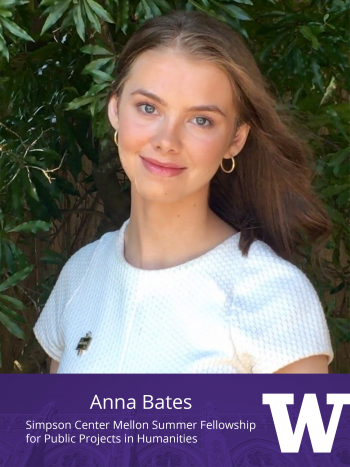 Congratulations to Anna Bates and Paul Tubig on being awarded Mellon Summer Fellowships for Public Projects in the Humanities, funded through the UW Simpson Center for the Humanities, for their project, "Philosophy Behind/Beyond Bars: Exploring the Intersection Between Philosophy and Prison."

Anna and Paul have been working in conjunction with the Freedom Education Project Puget Sound (FEPPS), an in-prison college program, to teach philosophy to incarcerated students at the Washington Corrections Center for Women (WCCW) in Gig Harbor, WA. Most recently, they coached an ethics bowl team of FEPPS students to compete in the Northwest Regional Ethics Bowl, which is, best to our knowledge, the first time that an ethics bowl team in a women’s prison competed in a major intercollegiate competition organized by the Association for Practical and Professional Ethics. Now with this summer fellowship, they plan to build on that work by developing a five-week collaborative seminar series to serve both UW philosophy students and incarcerated students in WCCW.

Anna and Paul’s proposed project seeks to collaboratively engage the interesting but underappreciated relationship between philosophy and prisons with students incarcerated in the Washington Corrections Center for Women (WCCW) and students the University of Washington. They recognize the significant role of prisons in the history of philosophy—both as a major context from which philosophers, as incarcerated subjects, have critically examined important philosophical questions and regarding prisons as an important object of philosophical inquiry. Their project is to design and conduct a collaborative seminar series, including a symposium at the end, that critically engages with philosophical work related to carceral systems and incarcerated persons. The participants will include both students at WCCW and students at the University of Washington. The aims are to trouble the traditional understanding of a humanities while destigmatizing incarcerated persons by recognizing them as equal contributors to philosophical discourse. Anna and Paul also want to expand philosophy to marginalized communities who are uniquely positioned to contribute valuably to the discourse and help build an open intellectual space and community for students who are incarcerated.

Unfortunately, due to the current pandemic, all volunteer-led programming and visitation have been suspended at all correctional facilities in the state of Washington. Additionally, the students at WCCW do not have access to the internet. As a result, the seminar will not be able to run in the immediate future. In the meantime, Anna and Paul will be focused on designing the curriculum for the seminar series.

We hope that they will be able to continue this project at the WCCW in the near future.