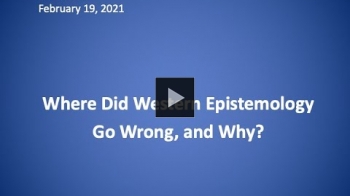 Where Did Western Epistemology Go Wrong, And Why? - Professor Bill Talbott

Professor William Talbott gave the keynote address “Where Did Western Epistemology Go Wrong, and Why?” at the 8th Annual PLATO WA Conference which was held virtually on February 19, 2021.

Talbott’s talk explores a central question of his forthcoming, Learning From Our Mistakes: Epistemology for the Real World (Oxford University Press; 9/1/2021): Why is so much Western epistemology either deeply skeptical or relativist? And a related question: Why is so much Western epistemology self-refuting or self-undermining?  He gives many examples of these two pathologies in Western epistemology. He includes an extensive discussion of David Hume’s epistemology, because Hume’s epistemology is rife with both pathologies, and yet, Hume’s epistemology is probably the most influential work in Western epistemology, and it remains extremely influential even today. Talbott traces the pathologies to the five presuppositions of what he calls the Proof Paradigm, a paradigm for knowledge and rational belief that originated with the ancient Greeks. Talbott identifies the five presuppositions and outlines a new theory of rational belief with a new paradigm, which he calls the probabilistic sensitivity paradigm, that avoids all five of them. The lecture is followed by questions and discussion. Learn more by watching Professor Talbott’s talk “Where Did Western Epistemology Go Wrong, and Why?”