Critical Thinking and the Cultivation of Your True Self with Dr. Cornel West 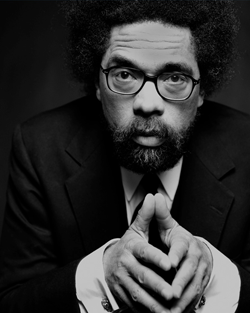 Join the Northwest African American Museum for an evening with Dr. Cornel West discussing "Critical Thinking and the Cultivation of Your True Self," sponsored by the UW Department of Philosophy, UW Race & Equity Initiative, and UW Department of Communication.

public intellectual and award-winning author Dr. Cornel West, professor of Harvard University, will join Dr. Ralina Joseph, NAAM’s scholar-in-residence, for a riveting discussion as part of the "It Takes a Village" series on Thursday, April 29, at 6 pm PST. Please RSVP as well as submit questions for Dr. West at www.naamnw.org/events/cornel-west

West made his film debut in The Matrix – and was (with Ken Wilbur) on the official trilogy released in 2004. He also has appeared in over 25 documentaries and films including Examined Life, Call & Response, Sidewalk, and Stand.

He has made three spoken word albums including Never Forget, collaborating with Prince, Jill Scott, Andre 3000, Talib Kweli, KRS-One, and Gerald Levert. His spoken word interludes were featured on Terence Blanchard’s Choices (which won the Grand Prix in France for the Jazz Album of the year of 2009), The Cornel West Theory’s Second Rome, Raheem DeVaughn’s Grammy-nominated Love & War: MasterPeace, and most recently on Bootsy Collins’ The Funk Capital of the World. In short, Cornel West has a passion to communicate to a vast variety of publics in order to keep alive the legacy of Martin Luther King, Jr. – a legacy of telling the truth and bearing witness to love and justice.

Dr. Ralina L. Joseph, UW Professor of Communication and adjunct Professor of American Ethnic Studies and Gender, Women, and Sexuality received her Ph.D. in Ethnic Studies from the University of California, San Diego and B.A. in American Civilization from Brown University. Dr. Joseph is the founding and acting director of the University of Washington’s Center for Communication, Difference, and Equity. She is a scholar, teacher, and facilitator of race and communication.

Her first book, Transcending Blackness: From the New Millennium Mulatta to the Exceptional Multiracial (Duke University Press, 2012), critiques anti-Black racism in mixed-race African American representations in the decade leading up to Obama’s 2008 election. Her second book, Postracial Resistance: Black Women, Media Culture, and the Uses of Strategic Ambiguity (NYU Press, 2018), is the 2019 winner of the International Communication Association’s Outstanding Book of the Year Award. Postracial Resistance examines how African American women negotiate the minefield of “ racism.” Listen to an interview about the book here.

Dr. Joseph is currently writing two new books. The first, Generation Mixed Goes to School: Fostering Mixed-Race Spaces in School Communities, (with Dr. Allison Briscoe-Smith, under contract with Teachers College Press), centers the perspectives of multiracial children in the creation of anti-racist schools. The second, Interrupting Privilege: The Promises and Perils of Talking Race and Fighting Racism, provides both the theoretical framework and a nuts-and-bolts guidebook to fighting back against everyday, interpersonal inequalities. You can read about Interrupting Privilege here.

This event will be recorded and viewable on Northwest African American YouTube channel starting May 4, 2021.