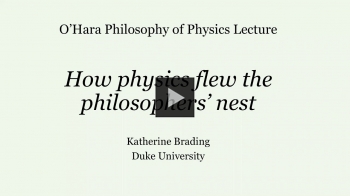 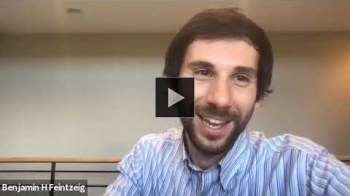 Q&A with Katherine Brading from "How Physics Flew The Philosophers’ Nest,"

Professor Katherine Brading, Duke University, gave the O’Hara Lecture in Philosophy of Physics virtually on May 20, 2021. Brading’s talk “How Physics Flew The Philosophers’ Nest,” explored the history of philosophy and physics; examining when, how, and why they became separate disciplines. The lecture was followed by a question and answer period moderated by Professor Benjamin Feintzeig.

Today Physics and philosophy are housed in separate departments and, by and large, practiced by different people. Physics is – or at least seems to be – largely independent of philosophy. It was not always thus. And, contrary to popular opinion, the “Scientific Revolution” of the 17th century is not when the two went their separate ways. So when, how, and why did physics fly the philosophers’ nest? How, and to what extent, did physics gain its autonomy? And with what consequences? This is a big story, and to find our way we’ll follow one thread that runs throughout the 17th and 18th centuries, engaging “philosophers” such as Descartes, Leibniz, Du Châtelet, and Kant, and “physicists” such as Newton, Huygens, Euler, and d’Alembert, alike. All puzzled over the same issue: how do bodies (inanimate, animate, or even human) act on one another?

This lecture was made possible by the generous sponsorship of the Patrick O’Hara & Caterina Randolph Fund for Philosophy.