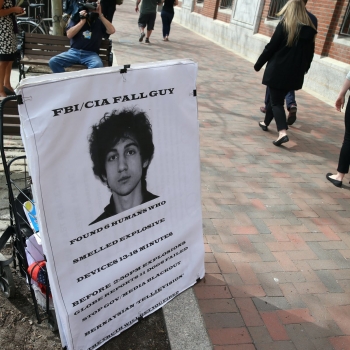 Amelia Wirts examines the risks of implicit bias in criminal punishment based on ethnicity or race, reflecting on the Supreme Court’s possible reinstatement of the death penalty for Dzhokhar Tsarnaev, who was found guilty of bombing the crowd at the Boston Marathon in 2013 with the help of his brother Tamerlan Tsarnaev.

I study criminal law and punishment as a political institution, including how it must fit within the values of a liberal democracy to be justified. Tsarnaev’s case is complicated because of the immense harm he caused to so many apeople.

My research examines how punishment affects members of society beyond the criminals and their victims. One of the key ways that punishment has a broader social effect is its capacity to express strong moral condemnation of actions that violate the basic rights of members of society.

But punishment also expresses moral condemnation of the criminal. This is where the risk comes in because a strong negative attitude toward one individual can reinforce prejudicial stereotypes about racial and ethnic groups.

Read the entire article on The Conversation: “Death penalty can express society’s outrage – but biases often taint the verdict.”