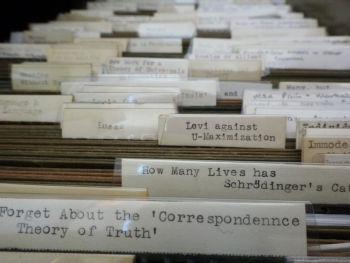 Anthony Fisher and Professor Helen Beebee (University of Manchester) wrote a guest post for the Daily Nousabout their work organizing and studying David Lewis’s archive of thousands of letters and the future challenge of how to gain understanding of philosophers and the history of philosophy when email is the main source of communication.

Fisher and Beebee reflect on how much they have learned about Lewis from his letters. “When we looked across his letters to detect arcs of thought we realized that for many of his views he either arrived at them or endorsed them well before we typically think he did. He is sometimes characterized as a philosopher who wrote a lot about philosophy of language, philosophical logic, philosophy of science, and philosophy of mind in the first part of his career and moved to metaphysics later. But his letters tell a different story. He was thinking about the metaphysics of time and time travel at the same time that he developed counterpart theory.”

They go on to discuss how problematic it will be to study philosophers’ correspondence in-depth in the future. The study of emails contains myriad problems, including privacy rights, unintentionally gaining access to emails that are private or fall under the privacy rights of students, many universities’ policy of auto-deletion of emails, password protection of accounts, and the sheer volume of emails.

Read the entire blog post on the Daily Nous: “The Philosopher’s Archive in the Digital Age: David Lewis and His Correspondence.”