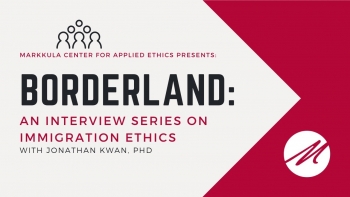 Professor José Jorge Mendoza is featured in the first episode of Borderland: An Interview Series on Immigration Ethics: José Mendoza on Immigration Enforcement, Crimmigration, Abolition and Anti-Colonialism hosted by the Markkula Center for Applied Ethics at Santa Clara University.

In the interview, Mendoza explores enforcement in immigration ethics and the social construct of being an undocumented person through a philosophical lens. He notes the harsh reality of current immigration enforcement policies—which have led to thousands of deaths in the Sonoran Desert and drownings in the Mediterranean Sea—and suggests that these deaths ought to motivate us to reexamine and change our current immigration policies.

Mendoza argues that in order to create a just immigration system we must know why and how the current systems were created in order to dismantle them and create new and better systems.

Watch or read the entire interview with Professor José Mendoza on the Markkula Center for Applied Ethics’ Borderland series website.