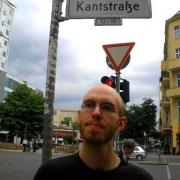 What areas of Philosophy do you teach?

I mainly teach 17th and 18th century European philosophy, with a focus on metaphysics and epistemology. But I'm looking forward to teaching Intro to Philosophy in the spring, which will be mostly non-historical. In the winter, I'll be teaching a seminar on Kant's metaethics, and I plan to teach more metaethics in the future.

What are you current research interests?

At the moment, I'm working on Kant's views on the epistemology of causation as well as a sort of anti-Kantian argument for moral realism that focuses on empathy.

What sparked your interest in Philosophy?

I remember, when I was 12 or so, worrying about whether or not I had a self. At the time, I didn't think of that as a philosophical issue, but my doctoral dissertation was in some ways a response to pre-teen Colin (and the news was good: we have selves, we just don't have direct introspective access to them). I also remember, sometime in high school, hearing some classmates arguing about religion, and getting frustrated that the ways they were talking made the disagreement seem bigger than it was. What came out of all that, I think, was a conviction that philosophy is a force for good: it can answer some of our deepest worries, and help us get along.

Well, it's still a work in progress. In any class, though, the main thing I aim for is that 'buzz' when everyone is the room in locked on to the same philosophical issue and coming up with ideas about how to deal with it. Getting to the point is always tricky, and I'm still figuring out the best tricks to make it happen. I try to never ask students questions that I find boring, though. A number of philosophers have claimed that, if you're genuinely philosophizing, you can't help but enjoy it. And Spinoza held that, if people genuinely philosophize together, they can't help but form a joyful community. I think Spinoza was right, and my goal is to make every class proof of that.

I spent the past two years teaching at the University of Melbourne. Before that, I taught for a year as a post-doc at NYU, where I did my graduate work. Both were great experiences.

What is your favorite thing about Seattle/UW so far?

I can't pick just one thing! It's been an absolute joy getting to know everyone in the UW philosophy community - it's hard to imagine a friendlier, more interesting group of people. I've also been enjoying being back in the Pacific NW. My mother's family is from Oregon, and I went to Reed College in Portland, so things feel very comfortable and familiar. As far as Seattle itself goes, I've been very much enjoying the bike trails and the food. My partner Naomi and I recently had some vegetarian sushi in Fremont that was unbelievably good.