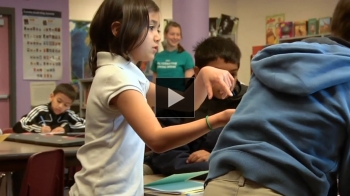 This in-depth look at the work of the Center provides a fascinating glimpse into the philosophical discussions of children, the reactions of their parents, and the impact the work has had on the educators involved in it. This latter category includes the regular classroom teachers in the schools, graduate students involved with the Center (including our own Janice Moskalik), and UW faculty (including our own Jana Mohr Lone and Sara Goering).

This video is just one piece of evidence of the growth in interest in philosophy for children and UW's central role within the movement. For example, UW recently hosted the third biennial conference for Philosophy Learning and Teaching Organization (PLATO). This conference, which centered on the theme of "Equity and Inquiry," brought together a large group of educators interested in how philosophy can be integrated into education at all levels.

Want to learn more about the UW Center for Philosophy for Children? Check out their webpage or find the Center on Facebook. You can also follow Jana Mohr Lone, the Center's Director, on Twitter (@JanaMohrLone).