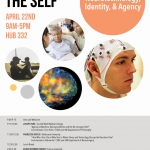 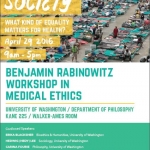 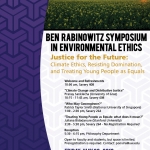 The Department of Philosophy hosted three events during spring quarter. Reaching across campus to other departments, students, faculty, staff and alumni to join us in days of philosophical inquiry and reflection.

In April, Professor Sara Goering organized “Stimulating the Self: Neurotechnology, Identity and Agency” along with the Center for Sensorimotor Neural Engineering and the Program on Values of Society. The main talks at the symposium were:

"I Am Who I Am, She Is Who She Is: When Illness and Technology Disrupt the Narrative Flow,” Françoise Baylis, Dalhousie University

Later in April, Professor Carina Fourie organized the Benjamin Rabinowitz Workshop in Medical Ethics – “The Sickness of Society – What Kind of Equality Matters for Health?” This interdisciplinary and international one-day workshop aimed to assess which kinds of equalities are significant for public health policies and health care systems. The day featured the following speakers:

“The consequences of contact with the criminal justice system for health in the transition to adulthood,” Hedwig Lee, Sociology, UW

In May, Professor Stephen Gardiner, Ben Rabinowitz Endowed Professorship in the Human Dimensions of the Environment, organized the Ben Rabinowitz Symposium in Environmental Ethics, "Justice for the Future:  Climate Ethics, Resisting Domination, and Treating Young People as Equals” featuring the following talks:

“Treating Young People as Equals: what does it mean?,” Juliana Bidadanure, Stanford University

All three of these events were free and open to the public.