#philosophy responds: Conversations After the Election 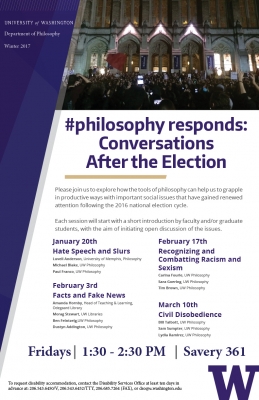 #philosophyresponds : Conversations After the Election poster

Please join us to explore how the tools of philosophy can help us to grapple in productive ways with important social issues that have gained renewed attention following the 2016 national election cycle.

Each session will start with a short introduction by faculty and/or graduate students, with the aim of initiating open discussion of the issues and will be held outside of Savery 361 at the large table on Fridays from 1:30 to 2:30 PM.