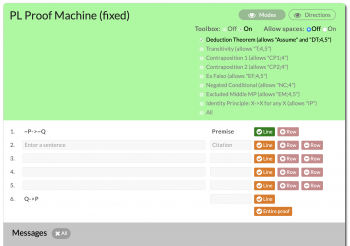 Ian Schnee created software to accompany the textbook Logic for Philosophy by Ted Sider (Rutgers) which he will be using in his intermediate and advanced logic courses. In teaching Introductory to Logic, Schnee has found the software essential to learning formal systems, as students need a lot of feedback on syntax and proof making, which the software gives them. However, for advanced logic, no major textbook comes with software, most likely because the market for the advanced level is significantly smaller than for introductory courses. This is unfortunate, since he believes students will benefit from software as much or more in advanced classes. In advanced logic students learn axiomatic systems, which are much harder to learn than the natural deduction systems taught in introductory classes.

One challenge he found in writing the software was that students are allowed to use various derived rules (called the toolbox) for certain problems, which is something they have a hard time keeping track of. So, the software has a built-in feature that allows the instructor to specify which rules are allowed in which problems. For example, here's a problem that students will have in class, for which they are allowed to use the deduction theorem from the toolbox.

Schnee implements active-learning principles (such as think-pair-share and peer instruction) in the classroom, and the software allows him to extend those principles to students' homework as well. Students complete problems with the software as they work through the textbook, rather than just passively reading along. The software also gives them immediate feedback and allows them to learn from their mistakes.

He has made the software available for others to use for free over the web (no downloading is required). Check it out here. (Make sure to scroll down on the page for an instructional video on how to use the proof machine.)

Schnee wrote the program over the summer, so winter quarter’s Intermediate Logic class will be his first time using it with a course. He is looking forward to feedback from his students and others on ways to improve the software as it is put to use.