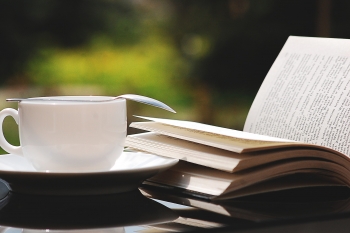 From fantastical graphic novels to exploring addiction to the philosophy of play, and everything in between, this year's summer book recommendations by the Philosophy faculty once again cover a wide array of subjects. Check out the books that our faculty members have read recently or are planning to read this summer. We hope you find a few new wonderful books to add to your reading list.

The Splendid and the Vile: A Saga of Churchill, Family, and Defiance During the Blitz, by Erik Larson

A gripping account of Churchill's first year as Prime Minister, 1940-41. Even knowing how it turned out, I couldn't put it down.

This is truly a literary biography, blending the where, when, and who of Updike's life with an account of his novels, short stories, and poetry. This is especially valuable in the case of a writer like Updike, who mined his own life so deeply for his fiction.

Being Mortal: Medicine and What Matters in the End, by Atul Gawande.

A moving and compassionate account of aging and end-of-life issues by the best medical writer that I know of.

What Doesn’t Kill You: A Life with Chronic Illness – Lessons from a Body in Revolt by Tessa Miller

Offers a first-person account of adjusting to life with a chronic illness, grappling with a healthcare system that is not well-designed for aid, and learning to appreciate and love what the body can do, despite these challenges.

Creative Care: A Revolutionary Approach to Dementia and Elder Care by Anne Basting

A beautifully written account of Basting’s MacArthur “genius” grant-winning work with elder communities, starting with her TimeSlips program (using photos for collective storytelling with elders with dementia) and expanding out to theater productions done in nursing home communities. Basting's work centers on “beautiful questions” (in our world, they might be called philosophical or existential questions) and how engaging elders in creative, meaningful projects builds social connection and a sense of purpose.

Life on the Rocks: Finding Meaning in Addiction and Recovery by Peg O’Connor

A short book exploring the intersections between addiction, philosophy, and meaning-making, from a philosopher who identifies as an addict in recovery.

Drug Use for Grownups: Chasing Liberty in the Land of Fear by Carl Hart

Power/Knowledge: Selected Interviews and Other Writings 1972-77 by Michel Foucault

I teach both for the Philosophy Department and the College of Education, and I've been frustrated for some time now with a few colleagues of mine in Education. They ask me what political philosophy is; hear my response then push back with subtle irritation against my account claiming that "the 'political' is just about power relations--isn't it all just about power relations?" My answer is: "no." In any case, I thought I would learn more about this sort of commonsense political position in education by teaching it next year in a course on Marxism, Foucault being the Marxist source of fixation on "power relations." I'm excited to see how much Foucault himself actually subscribes to this characterization.

The City and Man by Leo Strauss

I'm currently writing a book on the social-political aspects of Platonic science, and Strauss is a must-read for getting a handle on Plato's political position. This particular volume, however, includes not only account of the  but also his thoughts on Aristotle's Politics as well as on Thucydides, the historian and political theorist whose focus is the War. One exciting thing about the book is that it tells the story in a historically backward fashion--starting with Aristotle, then moving on to his teacher, Plato, and finishing with some thoughts on Plato's predecessor, Thucydides. I'm certainly excited to spend some time with this one.

A Different Pond by Bao Phi

Most of the new books I read these days are children’s books. This year, my favorite was A Different Pond by Bao Phi and beautifully illustrated by Thi Bui. It gives voice to the experience of growing up as a Vietnamese American carrying the intergenerational impacts of war and the responsibilities that older kids have when parents work overtime to make ends meet. It’s also a family love story.

Hilda and the Black Hound

Hilda and the Stone Forest

Hilda and the Mountain King by Luke Pearson

During the pandemic, my older child and I read and reread these graphic novels. They're philosophically rich without being heavy-handed. Hilda, the protagonist, is driven by deep moral and aesthetic commitments (one of my favorite lines: "everything is so interesting, don't you think?"), and we get to see how modern-ish people would exist in a world rich with spirits, giants, and other creatures. Even the structure of space itself plays by slightly different rules. Lots of fun.

America for Americans: A History of Xenophobia in the United States by Erika Lee

This is a very accessible and compelling history of xenophobia in the United States. Each chapter traces the history of a different immigrant group, beginning with German Immigrants in the 1700s, Catholics (especially Irish) immigrants in the early , and then continuing on to the exclusions experienced by racially non-white immigrant groups such as Asian (specifically Chinese and Japanese) immigrants, Latinx (specifically Mexican) immigrants, and Muslim immigrants. For a country that prides itself on being a "nation of immigrants," knowing this history is vital for understanding who we are and yet most Americans are not very familiar with this history.

Portuguese author Fernando Pessoa wrote under numerous "heteronyms", each with its own invented history, personality, and philosophy. Alberto is the first of his poetic heteronyms, a poet in the mold of Walt Whitman who sought to dig beneath beliefs, metaphors, and interpretations to experience pure sensation itself. The result is a gorgeous, philosophically rich body of poetry, of which Costa offers us the first complete translation into English (to my knowledge). Here is a brief sample:

Lightly, lightly, very lightly,
A very light wind passes,
Then departs, still very .
And I don't know what I'm thinking.
Nor do I try to know.

Brand new book by several authors, including the Nobel prize-winning author of Thinking Fast and Slow and co-founder of the heuristics and biases tradition in psychology and behavioral economics. For those interested in empirical work that bears on epistemology, action, bias, etc.

The Grasshopper by Bernard Suits

Originally published in 1978, this is a unique philosophy book about the concepts of games and play. Suits the moral of the Aesop fable of the ants and the grasshopper and that playing games the greatest form of human activity.

Deacon King Kong &  The Color of Water, by James McBride

This is a story centered around a Black housing project in NYC in the late 1960s. There is a plot, but what makes the book memorable are the characters and the language. The mixture of voices makes it sound like a musical composition. The main character is nicknamed “Sportcoat”.  Sportcoat’s conversations with his dead wife are priceless. McBride is also the author of The Color of Water, which I recommend almost as highly as Deacon King Kong. The Color of Water is the story of McBride’s family—especially his white, Southern, Jewish mother, which comes as a surprise because McBride is Black. It is quite a story.

I read a ton of fiction, and this was my favorite book that I read in the last few years. Gyasi's first book, Homegoing, was also excellent, and it followed several generations of a Ghanian family that was split in two through the trans-Atlantic .  Kingdom instead zooms in on one family of Ghanian immigrants in the US. The main character is a graduate student in the sciences and she struggles with, among other things, feeling alienated in academia and in her family because of the stark differences in these worlds.

Body positivity and critiques of diet culture have become more mainstream, but Gordon powerfully describes how these movements have distracted from the central claims of the activists who started them: there is pervasive and unjust anti-fat bias and discrimination. Gordon works through anecdotes from her own life, medical studies, and sociological evidence of pervasive bias against fat people to demonstrate how harmful this bias is, even when it is perpetuated by medical professionals concerned for health.

Work Won’t Love You Back by Sara Jaffe

This book was not what I expected. I expected more with a background critique of "lean in" feminism. Instead, this book is an extremely explanation of how the labor market changes over the 20th century and into the 21st century have transformed the way that we should think about well-being in relation to work. Recognizing the idea that "doing what you love" does not mean that you are not working is essential if we are going to rebuild a society where laborers can demand fair wages, benefits, and other important victories. She draws on the political strand of care ethics to demonstrate that retail workers, adjunct professors, athletes, and artists have more in common than we would think.

The White Album By Joan Didion

Recommended to me by a friend, these essays have been especially resonant to read during the pandemic. Focused primarily on the West Coast during the 1960s and 1970s, Joan Didion explores social tensions, cultural shifts, public policy, and current events through the lens of personal observation and life experience. The essays are beautifully written, insightful, and timely in relation to social and political events in the US over the past two years.

How the Word Is Passed: A Reckoning with the History of Slavery Across America By Clint Smith

I haven’t read this book yet, but having grown up in Virginia not far from Monticello Plantation, I am eager to see how Smith grapples with the specific, and diverse ways communities have rendered, or make invisible, the histories of slavery, often to make those histories more palatable.